So, as I’ve announced on Twitter, I plan to do a Justice League fic soon. This will take place in an alternate universe where the Justice Society of America had existed since World War II, but collapsed near the end of the Cold War, and are currently not recognized by the American government as being on the right side of the law. As such, those heroes left in the wake of the JSA’s collapse operate as individuals, without any form of organization. However, that all changes when a threat from outer space brings several heroes together on a mission to save Earth from a creature that could enslave humanity.

Before I release the first chapter of this story, dubbed Justice League Infinite (and for those wondering, either my previous DC Comics-oriented fics will EVENTUALLY be retooled to fit into this ‘verse, or will just be kept around as examples of my older work, I honestly haven’t decided yet), I’ve decided to go ahead and give previews to each of the seven members of the team. So, let’s start with arguably the most popular superhero to date: Batman.

Bruce Terrance Wayne of this universe bears more than enough similarities to the more common version adapted for various movies, cartoons, and comics, though there are also several differences. We’ll go over the latter, since if you don’t know much about Batman’s history, personality, and skills, chances are that you’re probably not even reading this. From a personality standpoint, this Batman’s paranoia and standoffish behaviour are played up a bit more. He doesn’t trust the other Justice League members, and is unwilling to part with his secret identity, though he does show respect toward Wonder Woman due to her status as a royal diplomat. In his life as Bruce Wayne, he’s been shown to have both women AND men on his arm as dates, even though he actually doesn’t see himself getting into a meaningful relationship with anyone, regardless of gender.

In terms of history, this version of Bruce was born in 1981 and lost his parents at age 8. Without going into too much detail, he’s been active as the Dark Knight for 6-7 years (and if you’re getting the references with these dates, bravo to you, lol), although he’s only been confirmed to exist for the past 2-3, with most believing he was a myth. He’s also only recently taken on his first Robin: This universe’s version of Carrie Kelley, who, like in The Dark Knight Returns, came to Batman’s aid when he was near death one night, and has been undergoing rigorous training to prove herself as his partner. There’re a few other characters related to him that are drastically changed in this universe, but I’ll keep them a secret for now. 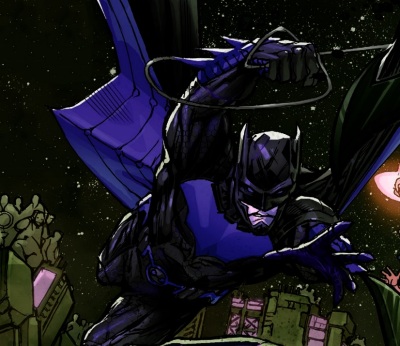 In terms of Infinite Batman’s skills and tech, the Caped Crusader still has his trademark detective skills and mastery of nearly every martial art known to man, as well as his intimidation, theatricality, and interrogation skills that allow him to appear superhuman, possibly even demonic, to the average thug. His Batsuit resembles the Justice League 3000 Batman’s costume, only darker and possessing violet-blue tones instead of red. In terms of what it can do, though, aside from the usual equipment of multi-purpose Batarangs, smoke pellets, and the Batclaw grapple gun, Bruce has built this suit as a means of stopping super-powered individuals if necessary, and has dubbed it ‘The Meta-Buster’. The paracape is thermal-shielded against ice and fire, though using it as such makes it nearly impossible to glide afterward. His gloves can generate varying levels of electricity to knock out foes or charge devices. There are also strength enhancers in the suit for combating foes with super-strength, though they burn out after a minute or two and require recharging. The cowl is connected to the Batcave computer, and the lens can grant him night, infrared, thermal, and even telescopic vision. Batman also has ultrasonic emitters that can summon bats or deafen enemies, and if the situation calls for it, it can seal Bruce off and provide him with oxygen to dive underwater or even survive the vacuum of space for a short time. All of this does come at a pretty big trade-off, though: The increased bulk of the Meta-Buster makes Batman a bit slower and less maneuverable, so anyone that can outpace him and is prepared for his various contingencies can easily subdue and disable him. And while it is, like most Batsuits, almost completely bullet and knife proof and insulated against electricity, it has its limits. If it takes too much of a pounding, the various added systems built into the Meta-Buster will shut down, leaving Bruce with a heavy armour no better equipped than some of his more traditional costumes.

Anyway, that’s all for the Dark Knight. Next time, we take a look at the Scarlet Speedster HERself, The Flash. Ja né!