As you’ll recall, at the start of the week, I announced that I’m doing a Justice League fanfic entitled ‘Justice League Infinite’. As such, I’ve been going through all seven members of this world’s League, what makes them different from their counterparts, and so on. So far, we’ve looked at Batman, The Flash, Poison Ivy, Superman, and Wonder Woman, as well as Mera, who plays a role in this universe’s back-story, especially as it pertains to Wonder Woman. So, for today, let’s wrap this up by taking a look at the final two members of the Justice League Infinite, starting with this world’s version of Green Lantern, Simon Baz. 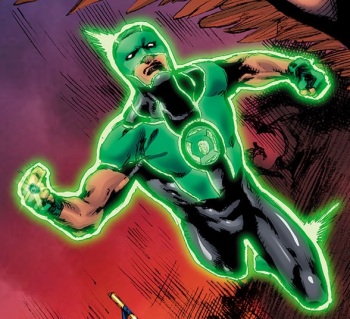 So, major change to the Green Lanterns in this universe is that there are no Guardians of the Universe and no Green Lantern Corps, meaning there is only one Green Lantern at a time…with one exception, which I’ll get into some other time. Basically, Alan Scott was the first Green Lantern, with the ring operating similarly to the current mainstream versions in that it seeks out those with the strongest will to wield it. Today, the ring is in the hands of Simon Baz. Unlike in his mainstream origins, in this universe, Baz was on a subway train that was demolished by a bomb. Simon managed to survive, but circumstantial evidence not only led the government to believe he was the one who planted the bomb, but that he was in fact a terrorist. From there, his origins play out the same, with the Green Power Ring reaching him just before hardcore agents could kill him. Now, unable to see his wife again, Simon is having to take up the guise of the Green Lantern as a means of hiding from the law, as well as using his new powers to protect the innocent. Baz possesses incredible will and selflessness, able to gladly take up the role of a hero in spite of how he’s been wronged. He seeks to one day prove his innocence so that he can be with the woman he loves, and despite the lack of evidence left behind on the train, he will not give up on that dream. He’s since met up with a teenaged Kyle Rayner, who possesses the Blue Power Ring, the two using the combined power of will and hope to defend and serve.

Simon’s costume is a bit different in this universe, as it is a full body costume covering him completely to keep his identity a secret. It has pretty much the same colour-scheme and design, it just covers his entire body, leaving no skin exposed, his mouth covered, and even his eyes hidden behind lime green lenses. Power wise, he’s exactly as you’d expect of a Green Lantern. While wearing the ring, Simon is able to form green light constructs of anything his mind wills him to create. He can fly, he’s semi-invulnerable, and he can survive in the vacuum of space. He can even summon the Green Power Ring to him no matter where he is. However, the ring only has a 24 hour charge to it, even shorter depending on how much is used at once. To recharge the ring, it must be touched to the matching Green Power Battery by the wielder, who must also speak the Green Lantern oath…I consider myself more a Blue Lantern kinda guy, but whatever, I’ll say it…

In brightest day, in blackest night
No evil shall escape my sight
Let those who worship evil’s might
Beware my power, Green Lantern’s light!

And that’s it for Green Lantern, which leaves the final member of the Justice League: Doctor Fate.

Now, like Green Lantern, there are two Doctor Fates in the history of this story: The original Doctor Fate, Kent Nelson, and his successor of Egyptian decent, Khalid Ben-Hassin, PhD. Khalid was searching ancient tombs in Egypt when he came across the Helm of Nabu, which he felt a connection to due to the original Doctor Fate being his childhood hero. As such, he has become Doctor Fate both out of a desire to protect the world from supernatural threats, as well as to try and locate Kent Nelson, who quite literally disappeared off the face of the Earth years ago. Khalid can occasionally have moments of self-doubt and hesitation, due to being uncertain if he’s the rightful owner of the Helm of Nabu, and because he oftentimes finds himself mentally drained and unfocused after using it. As an archaeologist, he’s fascinated by various ancient tombs, pyramids, and the like, which can at times override Nabu’s influence and personality. He’s also been helping Jackson Hyde, AKA Aqualad, in his studies of the mystic arts.

Since this is Khalid Ben-Hassin, his costume is virtually the same from the pages of Earth 2, as are his powers upon putting on the Helm of Nabu and merging with the ancient spirit. He can fly, grant himself super-strength, generate protective energy shields, bend fire and lightning to his will, move objects with his mind, teleport across large distances, read minds, is immune to disease and infection of any kind, will never age, and even more powers that he’s discovering all the time. However, for all of this power at the Sorcerer Supreme of Earth’s disposal, it comes at a great cost: The more Khalid uses, the weaker he’ll become over time, meaning he has to balance out how much power he makes use of. Also, while he keeps a small amount for himself even when not wearing the helmet, he’s far more vulnerable in this state. Likewise, the spirit of Nabu is trapped within the helmet, and is incapable of doing much without a host, though he can generate a temporary form if necessary, though at great risk to himself should something happen to him while in this state.

Anyway, that’s the last of the members. I’ll be sure to post on here when the first chapter is uploaded to Fanfiction.net. In the meantime, lemme know what you think of these choices, and be sure to enjoy the following collages I did to advertise the story. Ja né!