Y’know, I’ve made it clear that I’m not a fan of Batman killing people. I just think that’s contrary to who the character is in the modern age. Batman should not kill people. However, let’s assume you’re whoever it was that decided Batman must be a killer in the current DC movies. Regardless of my own personal feelings on the matter, let’s go with that premise. However, beyond simply acclimating us to Batman killing people, as Confused Matthew recently pointed out in his own review of Batman v Superman, you need to make sure that there are no contradictory issues involving him killing people with his other actions and inactions. And, in the case of these movies, I think I may have found one. 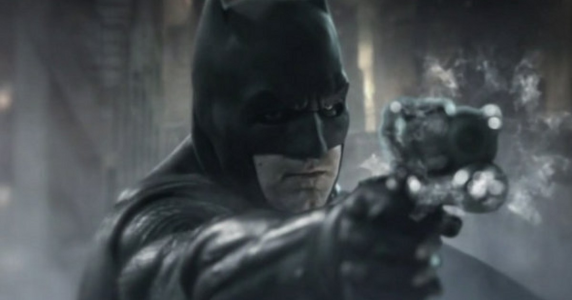 Now, I know we all liked to think that the ending of Man of Steel, where Superman snaps Zod’s neck, would act as the catalyst for him deciding to never kill again, that being forced to do so and feeling so awful about it would, in turn, make Superman a better person. However, considering he kills at least two more times in BvS, I think it’s safe to say that was never the plan. Sorry, it just wasn’t. BUT, let’s give the benefit of the doubt and assume that, given Batman’s decision not to kill or brand Lex Luthor at the end of BvS, he’s decided to abandon his killing ways. That way, we can even craft character development around it, in that meeting Superman and Wonder Woman and saving Martha Kent’s life, something has changed inside of him, and he’s not going to kill anymore. That means that, whenever the situation comes up where he COULD kill someone and doesn’t, we know why and it makes at least some sort of sense. However, there’s still a problem that’s been nagging at me ever since the movie came out…and I think I finally figured out what it is. And ultimately, it comes down to three panels…

And that’s when I realized the biggest plot hole regarding Batman killing people: Given what we’ve seen and heard in these movies, we can infer that Batman started down this much darker road after Joker killed Jason Todd. And, as I’ve mentioned before, that actually makes sense when you consider what happened in the comics. The biggest difference between what happened there and what’s going on in the comics is that, apparently, in this universe, Tim Drake never stepped into Batman’s life, and he went down a route of killing his enemies. But, if all of that’s true, then why in the hell is the Joker still alive? Why wasn’t he the FIRST person Batman killed? And don’t give me any bull about how he hasn’t been able to catch him, because I refuse to believe that, in all of that time, he NEVER caught him. Hell, according to Suicide Squad, Harley Quinn was an accomplice in Robin’s murder. Why didn’t Batman kill HER when he fished her out of the bay? Honestly, I think the only reason he doesn’t kill Deadshot is because his daughter was there watching the whole thing go down. Now, admittedly, we don’t know EXACTLY when he caught both of these individuals, but I was under the assumption they were both just a little bit before BvS, since the Justice League trailers and the ending of BvS seems to indicate he immediately began putting all of his efforts into locating and bringing Flash, Cyborg, and Aquaman into the fold. So even if he DID decide not to kill anymore by the end of that movie, these events would’ve happened BEFORE then. Harley and the Joker should both be dead as shit. It makes no logical sense, if Batman kills people, and they’re the ones who sent him down this dark path, that he wouldn’t kill them. So yeah, add this to the LONG list of ways that the makers of these movies have failed hard… … …Though it’s hardly the worst way. 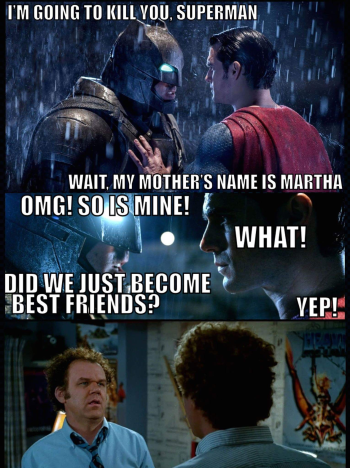 Are there any other plot holes you can think of regarding Batman killing people? Lemme know in the comments below. Ja né!

Why All The Hate For Batfleck?

Okay, I know I’ve talked about this before, and I probably will do so again in the future, but something’s been bugging me a LOT about fan reactions to Superman vs Batman: Why are people so pissed off about Ben Affleck being cast in the role of Batman? What’s got people angry? Why would they have concerns over this?

Now, before anyone takes this to mean I’m a huge Ben Affleck fan, I’m REALLY not. I don’t really have any major problems with him, I’m just not much of a fan, either. He just doesn’t really register with me. I’m also not saying that he will not suck. I haven’t seen any footage of him as Batman, so it’s impossible to judge one way or the other. I’m just saying that I don’t really get what people are so angry or worried over with him being Batman. I mean, we’ve seen plenty of odd choices for Batman over the years. Some worked, some didn’t, but they all at least TRIED to give us something memorable. In fact, speaking of past Batmans, a lot of the complaints I’ve heard actually sound rather familiar, in that they sound a lot like the ones people had for Michael Keaton as Batman: They could see him in the role, they couldn’t see themselves taking him seriously as Batman, etc. Guys, that’s what made him the perfect Batman for that movie: YOU WOULDN’T SUSPECT HIM! You would never look at Michael Keaton and go “Yeah, that guy is TOTALLY Batman”. I mean, you would NOW, because he was in two Batman movies, both of which were great (the second one didn’t work as well with audiences, but I thought it was great), but regardless, not being able to finger out a guy like Michael Keaton as Batman? That was the whole point. He didn’t act out in public like someone trying to hide something or someone desperate for attention, he acted like a normal guy (albeit, a rich one) who was keeping all his pain, angst, and exhaustion inside. So I don’t think that’s credible enough reasoning against Affleck.

One theory I have is that people think it’ll suck by virtue of Affleck’s OTHER superhero role, Daredevil. Now, I haven’t actually seen the movie, but I have seen clips, and…yeah, it’s not that great. However, to be fair, the same people who made that movie then went on to do Elektra, which was even worse, so I’m gonna cut Affleck some slack and suggest that he didn’t have the best direction…Oh, and while I’m on the subject, there’s a video on YouTube that’s basically a Daredevil trailer done in the style of the trailer for The Dark Knight Rises, definitely give THAT a look, just for fun. lol

Anyway, getting back on topic, and while I was talking about direction, that’s actually where MY concerns for Superman vs Batman comes into play. I’ve made it no secret that, while I liked Man of Steel, I had SERIOUS problems with it, namely the portrayal of Jonathan Kent (FU, Kevin Costner, even without those lines, you are still a dull and wooden performer if ever I saw one), and pretty much the final climax of the movie being a massive fight scene that destroys most of Metropolis and ends with Superman snapping Zod’s neck. Well, now the same guy, Zack Snyder, is doing THIS movie, AND he’s been asked to get creative input from Frank Miller, a man who never understood Superman even BEFORE he went bat shit insane! And apparently, this movie is going to take lots of cues from The Dark Knight Returns, which is a good book that made for a good movie, but is also infamous for its portrayal of Superman and the fight between him and Batman…Although, if we’re still trying to be fair here, it could’ve been worse. It could’ve been the sequel. But yeah, that’s MY concern for the movie…Well that, and rumours of Batman’s love interest being Supergirl. *shivers* But yeah, it’s got nothing to do with Affleck.

So those are my thoughts on Batfleck. Again, I’m not saying he won’t turn in a bad performance, it’s entirely possible that he’ll suck. I’m just saying that I can’t really say that he will suck before I see any actual footage of him as Batman. And until I see any footage, that opinion will not change. For now, let’s just hope this movie manages to be good, and possibly even makes up for the mistakes of the last one, because otherwise, I’m worried for the future of this film franchise. Ja né!