Injustice 2 – The Lines Are Redrawn Trailer

Welp, Injustice 2 is four months away, and we’ve got a new story-based trailer up, so let’s take a look, shall we?

So, with this trailer, we have confirmation of Robin, Poison Ivy, Brainiac, Bane, and Darkseid all either being playable or playing a role in the story. If they are all playable, then they join Superman, Batman, Wonder Woman, Supergirl, Blue Beetle, Atrocitus, Aquaman, Deadshot, The Flash, Gorilla Grodd, and Harley Quinn. Also, as I understand it, at least A Green Lantern (probably Hal Jordan) will be in the game, there’ll be skin/voice patches to include Reverse-Flash, John Stewart, and Power Girl, and we’ve had hints that Doctor Fate and Captain Cold will be in the game. All in all, a rather impressive roster so far.

As for the trailer, I could do without the call back to Lois and little Jon’s murders, since, as you all should know, that’s kind of a hot button issue with me. Wasn’t fond of it when it was first revealed, still don’t like it now. But, I understand that it was the event that kicked Injustice off in the first place, so it would be impossible to continue this story without it. It sucks, but what can you do?

Anyway, still plenty of spots open on the roster, and more to come via DLC, so who would you like to see announced? Lemme know in the comments below, and we’ll see what happens between now and May 16th. Ja né!

So, as of late, I’ve been watching a lot of kNIGHTWING01, AKA Kwing, and his let’s plays. Specifically, I rather like his LPs of superhero related games with his wife, who is affectionately referred to as Kwife. And, of course, that means I’ve been watching along with his ‘Stealth Guide with Commentary’ of Batman: Arkham Knight, which I fully plan to do a story-only review of soon. In the meantime, though, I thought it’d be fun to list off some of my favourite moments watching along with this LP. So, in no particular order, here are my 5 Favourite Kwing Arkham Knight Let’s Play Moments. And just so you know, obviously, there’s gonna be some spoilers for both the LP and the game in this video.

There’s just something I love about how horrified he sounds when this happens. I’m not even 100% sure I know what the hell happened here. Basically, he was taking out some thugs protecting the missile launcher set up on Founders’ Island, and he hits the last one with a Batarang, and for some reason (likely a glitch), the guy fell THROUGH a solid grate and plummeted to the ground below. Apparently, in Batman: Arkham Knight, you either die a hero, or you live long enough to see a glitch make you the villain. XD

#2 – “Is that a roadblock?” from Grinning Fishmonger

This admittedly took me a second viewing to fully get what the hell had happened. During one of the Gunrunner side-quest missions, the fleeing van that Kwing had to chase was suddenly stopped just up the road from where he was. Why? Because he’d earlier parked the Batmobile there, and much to his hilarity, the van could not, for whatever reason, steer around the thing, and just kept backing up and running into it for almost a full minute. Eventually, the chase part timed out and the van occupants declared that they “lost him”, even though the Batmobile was parked RIGHT IN FRONT OF THEM, and they steered off to go back to base for Kwing to follow them. This was AMAZING.

In all fairness to Kwing, based on a lot of videos I’ve seen of people playing this game, the Batmobile is not the easiest thing to control, and can have rather derpish moments. And sometimes, no matter how well planned you can be, accidents just happen. This is a combination of these kinds of moments. Right after escaping the exploding ruins of ACE Chemicals and talking with Alfred and Jim Gordon, Kwing decided to get back in the Batmobile. For some reason, it just proceeded to go drive backwards, right off the edge of the bridge, and splash into the river below. Y’know, Jimbo, I don’t think that THIS is how the Batman died. And somewhere, I’m sure that Harley Quinn was playing Amazing Grace on her kazoo in honour of the Dark Knight, who fell tragically because his car was stupid. LOL

#4 – Kwing Tells It Like It Is About The Batgirl DLC

Okay, technically, I’m cheating with this one, as it alludes specifically to a video he did outside of the LP. However, since he did allude to it throughout the series, mainly as he was playing the Matter of Family DLC, I feel justified in bringing up how he called WB Montreal out for their bullshit yet again. If you aren’t aware, Warner Bros. Games Montreal did both the Matter of Family DLC, and Batman: Arkham Origins, and in both of these, they’ve managed to royally screw up the overarching story of the Arkham games. I’ll leave it up to him to explain in detail exactly what’s wrong with this, but the short version is that Tim Drake’s presence makes no sense in the grand scheme of things and only continues to force a relationship that fans already admitted to hating down their throats. Because, hey, it’s not like DC has done THAT anytime recently, right?

So, um… … …there’re a lot of jump scares in this game. This one in particular scared me so bad that a little pee came out, and I think the same can be said for Kwife. Kwing had just found out about another body that had been strung up somewhere in Gotham and was gonna go investigate. So, he grapples up to a rooftop, all the while chatting about the Flashpoint Batman skin he was wearing, when, from outta NOWHERE, fucking Man-Bat pops out and scares the shit outta us! Between its roaring and Kwife’s terrified screams, I had to pause and turn down the volume on my speakers, it was so loud! WTF, Rocksteady?! LOL

Anyway, those are my favourite moments of Kwing’s LP. Make sure to go check it out, like, comment, and subscribe to his stuff, and hopefully he enjoys this little bit of free publicity. lol Ja né, and happy gaming!

So, Mortal Kombat X is on the way, set to release in a kouple of months (yes, I’m honestly doing the K instead of C at thing for this article, lol). As someone who played the original Mortal Kombat game when it was ported to the SNES, and has checked out additional entries as they’ve kome out for konsoles I own, I’m both excited for this release, as well as more than a bit disappointed that it isn’t koming out for Wii U. But hey, I kan at least watch playthroughs of the story mode to see what’s next for the kharacters, so I’m not lost should another Mortal Kombat game kome out for a system I own.

Speaking of, though, that brings me to something I’ve thought about for a while now. The general konsensus of everyone I’ve asked about the new kombatants or listened to talk about them is that these new kharacters and their designs are vastly superior to the ones kreated for what’s nowadays called the PS2 Trilogy (Deadly Alliance, Deception, and Armageddon), as well as Mortal Kombat 4. Now, while I agree there were more than a few stinkers from that era (Kobra, anyone?), there were still those that would be welcome additions to the new games. Hell, Kenshi already IS back. So, let’s take a look at a few of them. Also, be sure to click on their images to link to the Mortal Kombat wiki and learn more about them. For those hopefully about to Kombat, we salute you! 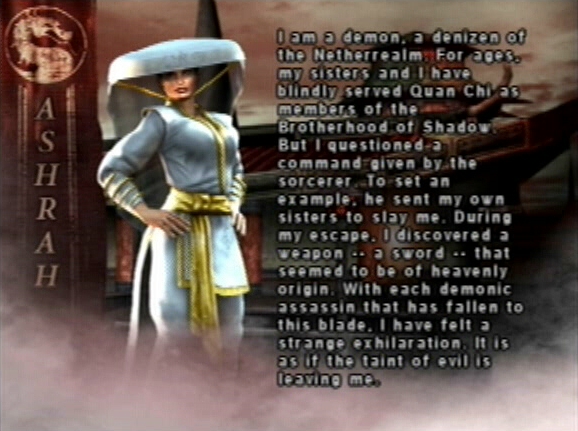 Yeah, suppose I’m not surprising anyone by starting with a woman, huh? lol To be fair, though, the reason I picked Ashrah is because she represents a very different kind of kharacter than is normally seen in Mortal Kombat: She’s a demon who seeks purification of the evil in her so she can leave the Netherrealm. She isn’t doing this for explicitly good or noble purposes, rather just for her freedom, but as she gets closer to her goals, she begins to take on a more holy persona. And this story would actually work well in a game that apparently involves a konflict with the Netherrealm, placing her as a possible ally for Raiden in the enemy camp. Plus, while I’m not wholly against the idea of women showing skin, it IS nice to see a woman in Mortal Kombat who isn’t a female ninja/assassin/etc. with a BUNCH of skin showing.

Well, seeing as how Liu Kang is either dead or horribly scarred for life following the end of Mortal Kombat 9, it seems like bringing in another Shaolin monk would be a good call. And sure, we’ve got Kung Lao, who looks AWESOME in this game, but one more wouldn’t hurt. And frankly, I just like how Kai’s gameplay makes him similar yet different to Liu, giving him a familiar yet new style for players to use. With all of that said, though, I DO hope Liu at least kameos in this game. 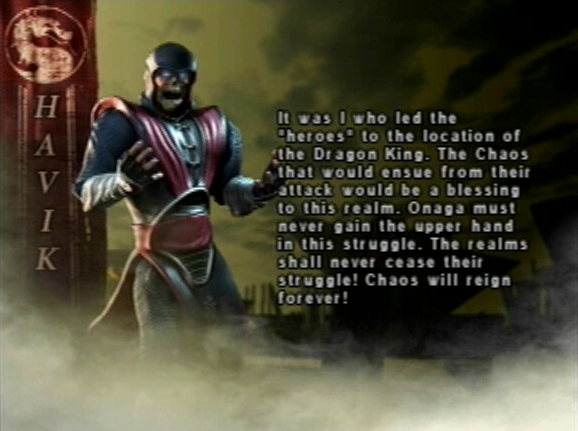 …Hear me out. I’m not gonna pretend like having an entire realm of existence dedicated to chaos (which doesn’t get a K, due to the name Chaosrealm) makes the most sense in the world, because it doesn’t. I’m simply suggesting someone like Havik would have some freaking KRAZY and sick fighting styles in this new game. Plus, scaling down the dedication to chaos makes a bit more sense when it’s scaled down to a single kharacter, like Havik. Plus, it was suggested in Noob Saibot’s ending in MK9 of some sort of alliance between Noob and Havik. Now, this ending is likely non-kanon, and is probably done just to reference the fact that Havik was originally an idea for a redesign for Noob, but it could have potential for a story. 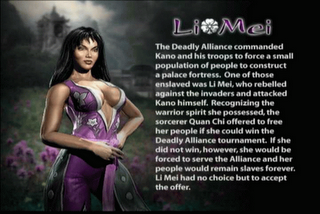 Now, with this, I’d HAVE to insist that Li Mei’s attire be more based on her original appearance, or her alternate appearance from Deception and Armageddon. Again, putting the women in thongs has kinda gotten old. Otherwise, her fighting styles would be very welcome to this game. In addition, her story kan easily be reinterpreted for MKX, given the kurrent power struggle apparently going on in Outworld.

…Again, hear me out. I’m aware of the fact that Mokap is just a silly secret kharacter based off Carlos ‘One Take’ Pesina, who played Raiden in the original Mortal Kombat games. So, why not just go with that? Don’t give him important storylines, don’t make him relevant to the plot, don’t do anything like that. Just have him as a hidden kharacter or DLK (downloadable kontent……Wow, I’m killing this joke dead, lol) for people who want him, and those that don’t want to have no need to do so. Easy-peasy.

Talk about a HUGE missed opportunity of a kharacter. I know that Frost has an interesting relationship with the fans, with some people loving her and others hating her. Me personally, I would love to see NetherRealm Studios take another krack at doing her right. And apparently, she’s even in the prequel komics released by DC Comics, so who knows, maybe they’ll do just that? We’ll just have to wait and see if those Frost fansites get any kind of love in the future. Plus, again, she’s a ninja, but she does NOT wear a thong!…..In her default costume. 😛

Anyway, that’s it for me. Got any past kombatants you’d like to see return for a future Mortal Kombat? Lemme know who they are, and we’ll see what happens in the future. Ja né!………..And please don’t ever let me do the K instead of C thing ever again. lol