Y’know, something that seems to happen a lot in comics is that superhero teams will go through multiple iterations with varying members that switch in and out of the roster. The Justice Society, the Justice League, the Avengers, the X-Men, the Teen Titans, the New Warriors, etc. Now, a word that’s been going around a lot lately is ‘iconic’, specifically as it pertains to individuals bearing legacy hero aliases or variations of superhero teams. Ultimately, though, what it boils down to is which version you think of first. Like, for example, I love the idea of people like Sam Wilson, Miles Morales, and Kamala Khan taking up the names of Captain America, Spider-Man, and Ms. Marvel. Thing is, though, as much as I love it and hope they stick around for the long-haul, unless your first exposure to the Star-Spangled Avenger was the book All-New Captain America, you’re probably gonna think of Steve Rogers first before Sam Wilson. And that is in no way a knock at Sam, it’s just how it is. Steve has now had five individuals who have taken up the shield in varying absences and has always found a way to retake it every time, meaning that in his 74 year existence in comics, he’s spent the vast majority of it as Captain America, and is therefore likely to someday become Cap again. The movies don’t really help much there either, since Marvel always tries to have their comics reflect elements of the movies for the sake of new readers that got into the characters and stories through the movies, except in rare cases. Like, I don’t expect Carol Danvers to become Ms. Marvel again now that she’s got a movie in the works as CAPTAIN Marvel, so Kamala is probably safe in her current role. 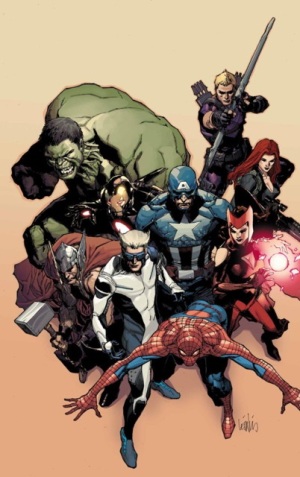 Still, that raises an interesting question: Is there a universally accepted definition of who the most iconic versions of heroes and/or members of superhero teams are? Because every comic is conceivably someone’s first, so who knows? Maybe some people’s first exposure to Captain America is the Sam Wilson version? And hey, Free Comic Book Day is meant to get new readers on board with comics, so it’s entirely possible that the first version of the Avengers for some people is the one that debuted there, assuming they don’t watch the movies of course. Likewise, people who don’t read the comics and only watch the movies would think of that team of heroes as the Avengers first and foremost, and would probably be shocked to learn that Captain America wasn’t a founding member, Hulk left within a couple of issues and didn’t return until 2012, and Black Widow didn’t join the team until a full 10 years and 100+ issues into the Avengers’ history.

As such, here’s the question I pose to you all: Who do you think of when you think of the Avengers? Do you think of the original five founding members of Ant-Man, Wasp, Thor, Iron Man, and the Hulk? Perhaps Cap’s Kooky Quartet of himself, Hawkeye, Quicksilver, and Scarlet Witch? Maybe the A-Next team from the MC2 Universe, consisting of J2, Mainframe, Stinger, and Thunderstrike? Or maybe you don’t even think of one single version of the team, but rather different members that have been on various incarnations of the team, like Spider-Man, Vision, Wolverine, Luke Cage, or Doctor Strange?

So, basically what I want is for you to list the first five to ten characters you think of when you hear the word ‘Avengers’. Keep in mind, there is no wrong answer here. It all depends on who you think of. List them in the comments section below, and we’ll see who everyone thinks of, and if there are any universally considered iconic members of the Avengers. Ja né!