So, as I announced before, I’m doing a Justice League fanfic entitled ‘Justice League Infinite’. As such, I’m going through all seven members of this world’s League, what makes them different from their counterparts, etc. As such, let’s take a look at this world’s version of The Fastest WOMAN Alive, The Flash. 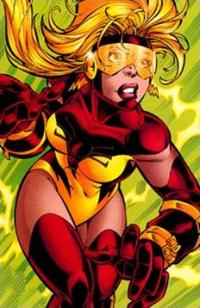 As you can tell from the above photo, this Flash is heavily based off of the superheroine Jesse Quick, a favourite of mine to be honest. In this universe, Jessica Garrick is the daughter of this world’s Jay Garrick, AKA the Golden Age Flash, and once served as Kid Flash. However, an accident during a battle with The Rogues resulted in Jay’s death, after which, Jesse took up the mantle, protecting Keystone City from crime. Like Jesse Quick, she is extremely goal-oriented and even runs her own company, though she also has a more thrill-seeking side to her that constantly wants out of the office and fighting criminals. She’s also taken up various extreme sports, has a pilot’s license, and even flown shuttle simulations. However, the death of her father has left a dark imprint on her mind, as Jesse also harbours a deep, personal grudge against The Rogues, blaming them for the death of her father and having little in the way of patience for their antics. Still, she is far from a being a brooding loner, and of the seven heroes on the mission to save Earth, Flash is the one most eager and adamant about starting a group, believing them to be the inheritors of the Justice Society’s legacy. She also has a hyperactive little brother named Bart (based off Bart Allen), who is also a speedster and wants to take on the role of Kid Flash, much to Jesse’s occasional annoyance. 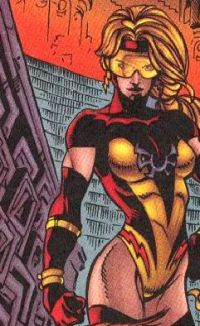 The Scarlet Speedster of Earth Infinite wears a costume almost identical to Jesse Quick’s from the earlier issues of The Titans, only that it bears the logo of The Flash. Also, the visor she wears comes equipped with an LED display that allows her to keep constant track of her surroundings and approaching obstacles or individuals. Naturally, as The Flash, she possesses superspeed, able to shatter the sound barrier with ease, and has the ability to process information like a super computer. She can also phase through solid objects by vibrating her body at just the right speed, create whirlwinds, and even sustain flight for a few minutes if she launches herself upward at the right speed and angle (an ability unique to herself and her counterpart from other Flashes). The best way to counter her in combat is to out-think her, as anyone who can predict her movements can adapt and bring her down regardless of how fast she’s moving.

Anyway, that’s it for The Flash…BUT, because I feel like giving something extra (and getting all these done before Friday, when Pokémon Omega Ruby comes out and takes up all my time, lol), let’s talk about someone I would LOVE to one day see on the Justice League for real: Poison Ivy. 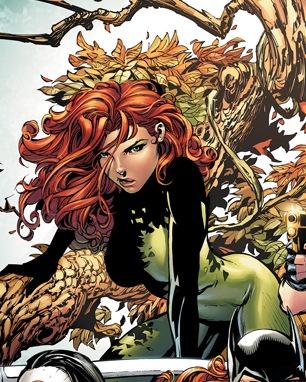 After she was seduced by Doctor Jason Woodrue and used as a guinea pig in his experiments, for which the doctor was able to avoid being brought to justice, Pamela Isley took on the identity of Poison Ivy and decided to dedicate her life to helping those that the law and the governments of the world couldn’t or wouldn’t help, whether those in power like it or not. Pam has a slight case of S.A.D., or Seasonal Affective Disorder. She can at times be a bit violent, even ruthless against those that harm others, but she’ll relent when asked to. She also has a particularly soft spot for children, especially orphaned or otherwise estranged children. As such, in this universe, it’s Pamela who discovers Garfield Logan and gives him a home when most of the world shuns him, and in turn, his more jovial side helps her to look on the light side of life. 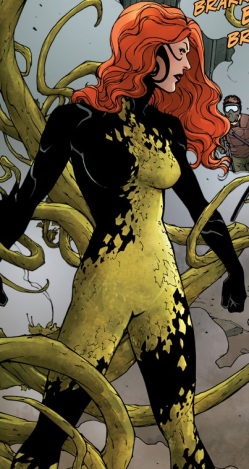 Poison Ivy possesses a connection to The Green, allowing her to commune with and control all plant life on the planet. As her costume (lifted from The New 52) is laced with vines, leaves, and other forms of plant-life, this makes it a living entity on its own that can be used as a weapon, binding and whipping foes from a distance. She can even ensnare her own body in hardened bark to protect herself, or to improve her strength in attacks. Pam is also immune to all venoms and toxins, is highly resistant to mind control, and can even pass her consciousness along into a plant-based avatar. Finally, the Queen of The Green can use various powders and chemicals meant to paralyze, knock out, or otherwise incapacitate foes, and even force them to tell her whatever she wants to know. However, Ivy does have a massive weakness: Because she can hear the voices of all plant life, their cries of pain could distract her and cause her to lose control of her powers. Also, she’s highly vulnerable to ice based attacks and fire. Still, she is a proven survivor who will go to any lengths to preserve and protect.

Next time, we check out the Man of Tomorrow: Superman. And this version is again based largely on a somewhat…different take on the character. 🙂 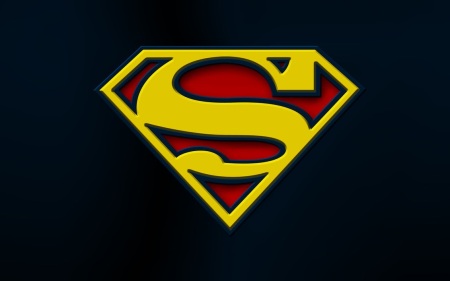