So, as I’ve mentioned before, I’m planning to pick up the new Black Widow, Ms. Marvel, and She-Hulk books when they come out. In addition, I’m honestly kind of enticed into at least checking out an arc of Iron Man‘s coming up soon where Malekith, the main villain from Thor: The Dark World, plans to find the Mandarin’s rings to gain even more power. However, since money’s gonna be a little on the tight side for reasons I don’t wanna get into, that means dropping some titles to make room for the new ones. So, let’s go through the books I regularly buy these days to get a better idea as to which stays and which goes.

Hell no, I ain’t dropping this book! This is the best frigging book DC puts out every month! Scott Snyder and Greg Capullo have been putting out one of the best runs of Batman in years, and I’ve been loving the crap outta this book since day one that I’ve been buying it, and I honestly don’t see that changing any time soon. Batman STAYS.

Again, the best Superman book of the New 52, though largely because it still feels like the pre-Flashpoint Superman. Y’know, the far better one. lol Not planning to drop this one, but depending on how long it winds up lasting, I may not have a choice. For now, however, Superman Unchained STAYS.

Nightwing has been great, especially since the move to Chicago (although I still don’t understand why there and not a New 52 Blüdhaven, but whatever). I’ve said it before and I’ll say it again, Nightwing has kinda been reminding me of Spider-man before Marvel ruined Spider-man. Now, depending on the ending and fall-out of Forever Evil, I MIGHT be dropping this book, or it might even be getting cancelled. We’ll just have to see what happens.

As great as Supergirl’s been, I’m thinking I might have to drop it, on account of a change coming up where Supergirl is going to be joining the Red Lanterns. Mind you, that all depends on whether or not this decision turns out to be permanent. If so, dropping. If not, we’ll see. Either way, though, I think I’m gonna skip the next arc involving Lobo, just because it doesn’t look terribly interesting and it’ll free up some cash.

Yep, I am coming back to Gail Simone‘s Batgirl, as was always my intent once Batgirl: Wanted was over. I won’t be picking up the next issue, since it’s a tie-in to an event I’m not gonna be following, but after that, apparently Batgirl’s gonna be teaming up with Strix, so that should prove interesting. So yeah, gonna say with some confidence that Batgirl STAYS. 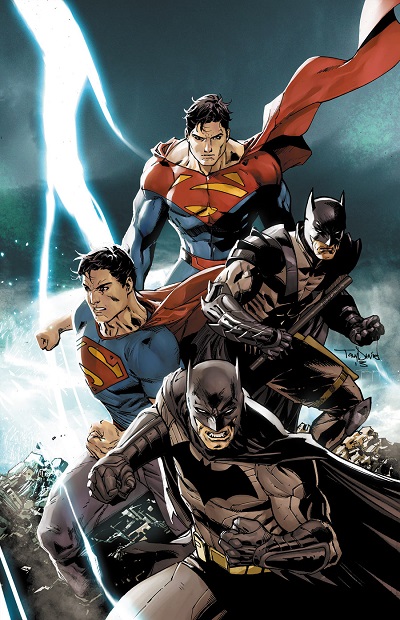 Batman/Superman has been a lot of fun, albeit pretty different, and I do plan to get the trade for issues 1-4 when it comes out, perhaps for my birthday, but I don’t really plan to follow the crossover with Worlds’ Finest, so I guess whether I continue to pick it up after that will depend on what comes afterwards. Still, I give props where props is due to Greg Pak for making this a fun series, which is what a team-up book for Superman and Batman should be. Now if you could talk DC into bringing back the old Superman/Batman logo for it, that’d be great. I don’t care which hero gets top billing, just bring back the logo. lol

James Tynion’s Talon’s been AMAZING, but it’s also changing writers and gonna be going in a new direction, so I gotta wait to see how that goes before making a decision. If it remains as great as it’s been, and we get to see Calvin Rose and Casey Washington continue to be awesome, definitely gonna continue to pick Talon up.

Brian Wood’s X-Men continues to be fun and engaging, which is good since it’s the only mainstream all-women team right now with Fearless Defenders being cancelled and Birds of Prey having Condor, AKA That Guy No One Cares About. And I know, the Birds have had a dude on the team before in the form of Hawk, but that was only ‘cuz Dove was on the team and it’s always best to keep Hawk and Dove together. Sadly, it had a little bit of a shake-up with its roster due to Remender deciding to kill off Rogue in Uncanny Avengers and Kitty deciding to go hang out with Cyclops of all people, but the current line-up works too, so I’m probably gonna keep with it.

The Movement…Yeah, I’m sadly done with this one. Not Gail Simone’s best work, as I feel the overall storytelling and character arcs are kinda messed up, but the characters themselves are alright, and I hope that the book improves and gets new readers. Maybe I’ll pick it back up someday if that happens.

On the other hand, Gail Simone’s Red Sonja is definitely sticking around on my pull list. This is Gail at her best, when the people above her basically just let her do whatever she wants, and it’s FANTASTIC. XD So yeah, Red Sonja STAYS.

And finally, Batman and Robin, or rather, Batman and Whoever these days. Look, I’m gonna be honest, I like Peter Tomasi‘s writing a lot, but at this point, if we don’t get a new Robin soon, this book is going to suffer a LOT. Why? Three words: Lack of direction. It feels like Tomasi is having to stall for the moment that either Damian comes back or someone takes his place. Batman and Two-Face has been alright, but if this continues for much longer, I may need to seriously consider dropping this book.

So, of the books I just listed, four are staying for certain and one is getting dropped. That leaves Nightwing, Batman/Superman, Supergirl, X-Men, Batman and _____, and Talon. Which of these books do you think deserve to stick around, and which do you think should be banished from What I Bought Today? Lemme know in the comments, and/or vote below which of the six you think is the best, and we’ll see what happens in the new year. Ja né!

So, some new news from DC Comics, as apparently in addition to the Batman/Superman crossover book, there’s also going to be a Superman/Wonder Woman book coming out in October. And to those wondering why the title of this article is somewhat pessimistic, I would like to explain very simply why I think this book is gonna suck. And just to warn everyone, this is probably going to be a Joe Vargas-style rant by the time I get to the part that pisses me off most.

Now, I should list a few things I find noteworthy arguments to it sucking right off the bat. First off, I don’t mind that one name comes before the other, because when I see a crossover book, I don’t think that the one in front is trumping the other, I think of the two names together as a team. That’s just how I see it. Now, is it possible that’s not how it actually works? Of course. I’m just saying it doesn’t bother me personally. Also, I should point out that the writer is Charles Soule, who is currently writing what I’m told is a pretty good Swamp Thing. The other thing I should note is that this book has the potential to be awesome if it focused primarily on the two just being awesometastic superheroes. Plus, think of the potential villainous team-ups they could take on, like Lex Luthor and Veronica Cale, or Metallo and Cheetah. Y’know what? I’d buy that!

Now lemme tell you why it’s going to suck, and suck HARD: Because it’s NOT going to be centred around them as a superhero duo, it’s going to be centred around them being a couple. To this, I have to ask the obvious question: WHY? Why would you do this when you know everybody HATES what you’ve done with these two as a couple? Hell, didn’t you recently hint that the relationship was going to end soon, and end rather badly at that? So why in the hell are you having a book written where their relationship is the focus? GAAAHHHHHHH!!!

What’s particularly odd about this is that Man of Steel has just come out (no, I haven’t seen it yet, but when I have, expect a vlog), where one of the main characters is Lois Lane, and the two are in a relationship. So why in the hell is she constantly getting buried in the comics??? They split up the marriage, FINE. They spent a really long time as a couple without being married, I could see them reverting back to that. But WHY Wonder Woman?! I’ve mentioned before that the relationship angle COULD work with the right writing, and I mean it, but every time I’ve ever seen somebody from DC write it, it SUCKED. The best story I’ve ever seen that in any way, shape, or form dealt with a possible Superman/Wonder Woman pairing was JL8, and that’s not even a DC owned comic!

…ANYWAY, like I said before, if this was a book focusing on the two as heroes saving the day, that’d be great. But it’s NOT. This is a poorly masked attempt at a superhero romance book. And the sad truth of that is, even by that definition, it’ll probably fail HARD. Nope, all you’ve really done, DC, is push the fans that hated this idea in the first place past the point of no return. Now if you’ll excuse me, I gotta go learn the Red Lantern oath, because I’m the type who hates to see things go to waste, and right now I feel that if my rage could be turned into a fuel source, I could power the whole planet for the next few decades. Ja né, and fuck whoever thought this was a good idea!