How Would I Do A Homebrewed Pokémon Game? (Or Just A New Pokémon Game In General) + What Am I Gonna Do For Blog Post #500?

So, I’ve been watching along with so many others as Linkara plays the homebrewed Pokémon game, Pokémon Omicron. It was made on an RPG Maker (and speaking as someone who used to have one, I can tell you that’s damned impressive), and while it’s still technically incomplete, it apparently has about 80 hours of playtime to it, and only requires some post main game content to be finished. As such, I decided to pick it up myself, and have been rather enjoying the game. It has the occasional visual bug, and the story suffers from some emotional whiplash at times since it tries to be like other Pokémon games while injecting darker content, but it’s good nonetheless. And, while I personally chose not to use this, the game also comes complete with special options for Nuzlocke Challenges. So, if you ever wanna pick it or its other version, Pokémon Zeta, up and play, by all means, click the image below and check it out.

As a result, I started thinking: How would I do a homebrewed Pokémon game? Now, keep in mind this is all hypothetical, I could NEVER do this game by myself. That said, if you like some of the ideas I post, feel free to use ’em, though try to at least give credit where it’s due, eh? lol Anyway, let’s start with…well, the start.

While I like the idea the creators of Zeta and Omicron had, having three different Pokémon from the norm be available as starters and changing the methods and levels required for evolution, I gotta say, I don’t see the point then to have them be the standard Grass/Fire/Water choices. Personally, I would go with one of two things: Either have the player choose between Magby or Elekid (and by the way, Magby already IS the Fire-type Starter in Zeta & Omicron), or have them start off with Eevee, and incorporate the shards from Pokémon XD (with a few others to account for the newer evolutions) to allow the player to have whatever type they want as their starter, and your rival just gets something strong against it as one of their strongest Pokémon.

First off, I’d have the rival’s gender as something the player can choose. Second, I’d go back to basics and have the rival be your final opponent at the Pokémon League. And that’s not me saying I dislike what Zeta & Omicron went with, by having the player’s mom be the champion, since I LOVE it when the mom does awesome stuff. This is just what I personally would do. And finally, I’d have them be encounterable at least once per town. Maybe not in a battle, but that you at least bump into them in every town, and there’s always this feeling like they’re one step ahead of you.

I dunno if many people do this anyway, I know I do, but I’d make all Gym Leader Battles so that you HAVE to use a set number of Pokémon, namely the same number as the Gym Leader. It just makes things more challenging for the player, and let’s face it, a bit more fair. The Elite Four is fine, though, since part of the point is being able to survive all four without being able to go back to a Pokémon Centre. Also, I’d make a fugging DARK-TYPE GYM. I cannot stress this enough, people. In fact, I’d make it the first Gym, since only one of the Eeveelutions has a specific type advantage to Dark. Likewise, I think I’d make the last Gym Rock-type, and have the Gym Leader use fossil Pokémon. 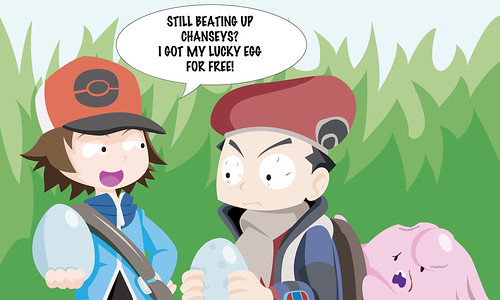 One thing that has driven me crazy as of late about the newer games is just how easy they are because of stuff that’s given away without having to be earned. I’m sorry, but back in the day, wasn’t like that. As such, while I’d be fine with including items like the Lucky Egg and Exp. Share, I’d make them items you need to earn, either via catching a certain number of Pokémon, gaining a certain number of badges, or just accomplishing side-missions.

As for the evil team, we’ve had the thieves, the eco-terrorists, the psychos out to destroy the world, a group of PETA wannabes, and a group wanting to forcefully remake the world. I think I’d want a team that’s focused on trying to make Pokémon feral, believing that humans tame them from being the wild creatures that they believe they’re meant to be. Rather than specialize in types, though, like many teams in the past (there HAS been an overuse of Normal, Dark, and Poison by evil teams), they’d focus primarily on Pokémon from the Monster and Dragon Egg Groups.

Anyway, that’s all I can think of at the moment. Thanks for checking this out, feel free to leave a comment, and let’s see what new kinds of homebrews are made in the future. Ja n-……………..Say, it seems this was the 499th blog entry, meaning the next one makes 500. Wow, time sure flies. So what can I possibly do for such a huge milestone in my blog’s history…?