So, since I’ve been getting back into Digimon as of late, I thought I’d go ahead and look at the trailer for the newest game in the series, Digimon World -next Order-.

…Okay, I find myself wanting to ask some questions and do some analysis, but how best to do that?

So, right off the bat, I can tell that this takes place in the same world as Digimon World and Digimon World Re:Digitize. Some of the locations look similar enough to those seen in previous games, but that have clearly been developed more since that time (remember that in the Digital World, time moves much faster). Also, the presence of Jijimon and a battle system similar to those games furthers that belief. However, the battles have a very obvious tweak added: You now use two Digimon instead of one. And hey, two’s fine. It’s not like some of the games where you have six. The only time I’ve ever been okay with a game having that many Digimon partners is when you play as multiple kids on the same team, like the Digimon Adventure 01 game, or when it’s a situation like Digimon Fusion. Otherwise, much as I like the Digimon RPGs for the Nintendo DS, that always bugged me a bit.

There are also two protagonists you can play as: A boy and a girl (and yes, we’ve got a female goggle head ^_^). However, something noteworthy that I can’t get past: The boy has Agumon and Gabumon as his initial partners, while the girl has Biyomon and Palmon. Now, the obvious reason I can think of is that Agumon and Gabumon are more associated with male protagonists in the games and anime, while Biyomon and Palmon are more associated with girls. With that said, though, I can’t help but wonder about something: Obviously, with two partners, Jogressing (DNA Digivolving) is gonna be a thing in this game, and we even see Omnimon in the trailer. So, my question is, does this mean Biyomon and Palmon can eventually Digivolve into two Mega Digimon that can also Jogress in this game? I mean, to keep things fair and even between the two protagonists’ Digimon? I know that’s what I would do. However, now all I can think of is Rosemon with wings. lol

Anyway, all things considered, the game looks good, and I hope to see it in North America… … …and, let’s be honest, beyond a fan-made patch, probably not. Still, I hope fans in Japan have fun with the newest entry in the series. Ja né!

…So, I may be pushing Power Rangers Guardians of Gaia back a little. Why? Well, because when I get into a franchise again, I tend to get into it so much that I become a bit single-minded on it. What I’m saying is…I started a Digimon fic. 😛

It is entitled Digimon Adventure DM, and, much like a lot of versions of Digimon shows, games, and manga, takes place in its own continuity. It’s actually an idea I’ve had bouncing around for a few years now, and I’m happy to see that I’ve finally found the time to make it happen. The Digimon presented will be a balance between the old, the new, the rarely seen on the show, and some that are completely made up. Also, while it mostly sticks to the English translations of the show and the terminology used there, because some of the translations don’t make much sense, and because some Digimon, their names, and their attack names have MULTIPLE translations, the names that I’ve chosen to use might not seem to have much of a pattern to them, but don’t worry too much about it. I’ll also be posting bios of the characters in the fic to Deviant Art, and I’ve already done so with the main lead, so feel free to click the image below to read more about him.

Anyway, the main thing I wanted to talk about here is that, while I have an idea of the general story I want to tell, and have already decided on the Digimon the kids in this story will use, I’m more than open to suggestions of Digimon that can appear as enemies in the story. Now, I can’t guarantee that every Digimon that is suggested will make an appearance, but I’ll certainly take each and every suggestion under advisement, and I might even be willing to credit those who make certain requests in the Author’s Notes at the end of a chapter. As such, feel free to post requests in the comments section below. 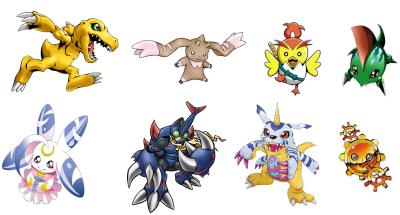 So yeah, that’s all there is to this. Be sure to check out the story if you’re a Digimon fan, and lemme know what you think of it. Ja né!