My Thoughts On The DC Rebirth Line-Up

Yeah, this is kinda late, but I thought I’d wait at least a little bit to see what news emerged before giving my thoughts on the current line-up. There were a lot of rumours going into Rebirth, namely what exactly it was. Another complete universal reboot, a soft reboot, a changed line-up to better reflect the shows and movies going right now, etc. In the end, though, what it appears to be is basically taking the concept of books like Green Lantern Rebirth and The Flash Rebirth and applying it to the DC Universe as a whole, as Geoff Johns explains here:

So, it doesn’t seem to be a universal reboot, but rather a soft reboot to reintroduce certain aspects of the characters that we love, as well as re-establish certain other heroes. We can go more in-depth about what that might entail, as well as the cryptic words of the mysterious narrator, later, though. For now, let’s just look at the actual line-up of books that have been confirmed thus far, which looks like this: 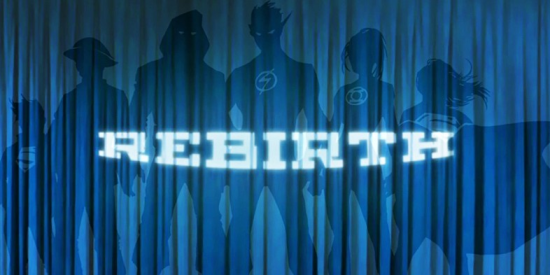 …So, let’s go over my thoughts for now about some of the announced books, starting with… 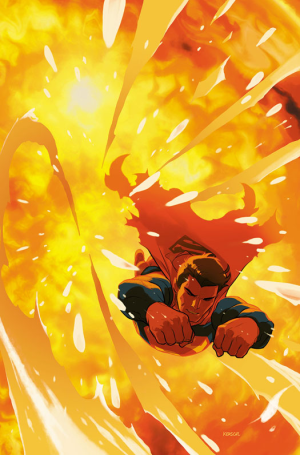 Looks like the Superman titles are undergoing a major revamp. While Action Comics is going back to its old numbering, Supergirl is returning with her own title (about time), and we’re also getting the new books Superwoman, Super Sons, and The Super-Man. If I had to take a guess, and I suppose at this point that’s all I can do, I’d wager that this all has to do with the upcoming Super League storyline that’ll wrap up the current Superman titles, with Superman enlisting several other superheroes as a team of Supermen (and Superwomen, it seems). Why is he doing this? Well, recently, Superman was able to regain his powers, but at a price, and he’s potentially dying, so he might be trying to pull a Batman and have the Super League act as a contingency should something happen to him and the world still needs Superman. Also, Batman/Superman and Superman/Wonder Woman seem to be getting dropped in favour of a Trinity book, which I am 100% okay with, especially since both books have been telling the same story as the other Super titles anyway. Might as well just put all three in a single title where they all get top billing. Also, I can’t help but notice that Superman: Lois And Clark is disappearing, but I’ve heard that the pre-Flashpoint Superman who appears in that book will both be involved in the Super League story as well as Rebirth, so not crossing them out just yet. Lastly, the one book that got me to raise an eyebrow most in this whole line-up was “The Super-Man”. However, I’ve since been directed to a cover for Justice League #51, where Lex Luthor is shown to be in a Superman-esque costume. Perhaps an attempt to cast Lex Luthor as the evil Superman that was originally conceived before Action Comics #1? We’ll see. Oh, and just saying, PLEASE DC, put Superman in a costume that at least balances out the three colours better. There’s just too much blue and not enough yellow in this equation.

I’m a bit interested to see where Batman goes now that he’s been back from the dead…again. lol I mean, the last time he came back, he created Batman Incorporated. Right now, it feels like a similar idea isn’t far off, with Jim Gordon apparently keeping his Batsuit, Batgirl starting a new Birds of Prey team, and Dick Grayson evidently going back to being Nightwing. And, if you’re confused about that, well…Batman And Robin Eternal #20 kinda revealed that Helena Bertinelli set it up to where Spyral’s orbital little satellite has the ability to make everyone forget about his unmasking and ‘death’ in Forever Evil, thus allowing him to go back to his old life if he so chose. And, I gotta admit, when I first heard about that, it actually sounded like an intriguing moral and ethical dilemma: Should Dick use this technology, essentially mind wiping the entire planet’s population, so he can go back to being Nightwing? Or should he continue to work for a group of secret agents who are CONSTANTLY bending the rules of what is and isn’t ethically sound or legal in order to get the job done? It’s not an easy situation to figure out… … …Too bad I know for a fact that they’re not gonna explore it much and instead it looks like he’s just gonna flip the switch and damn the consequences. I’m not saying that’s necessarily WRONG, just…kinda feels like the easy way out. Frankly, at this point, I just hope they put him back in blue this time around. I’m also interested to see what Batgirl And The Birds Of Prey will be like, and I kinda hope that Gail Simone ends up writing it eventually. Ask nearly anyone, and they’ll tell you that Birds of Prey was at its best when Gail was writing it. No sign of a Robin book yet, which is a little concerning, and it looks as though Gotham Academy is continuing on. And lastly, yeah, I remember what my initial reaction was to Red Hood And The Outlaws coming back, but the more I think about it, the more I realize that, as long as that book is around, it keeps Scott Lobdell away from anything I actually CARE about. 😛

SONOFABITCHMOTHERFUCKINGSHITMASSAGINGCOCKGRINDINGMONKEYFACEDCLOWNFART!!! Just when Justice League had become AMAZING, Johns and Fabok are both off the book! Didn’t I specifically say I wanted them to stay on the book going into Rebirth?!…Well, hopefully, Fabok can find work on one of the other titles. I’m personally hoping for Wonder Woman, because I fucking love how he draws her. Speaking of, I’ve been hearing rumours (so take this with a grain of salt) that Marguerite Bennett could be the new writer for Wonder Woman, which is actually funny because she’s Scott Snyder’s old pupil, and I was requesting Scott Snyder’s Wonder Woman a while ago, so…Yeah. lol Anyway, Justice League of America is apparently just gonna be Justice League America…’kay. Why we can’t just call it JLA, I dunno.

So, I’m guessing that since there are two Titans books right now, Teen Titans and Titans Hunt, and there are two Titans books post-Rebirth, Teen Titans and just plain Titans, that plain Titans is probably gonna be about Dick Grayson, Donna Troy, Roy Harper, and the other older Titans. With any luck, we’ll see Starfire join that team, since her book is ending (not cancelled, though, as it was apparently always planned for 12 issues), and otherwise, I fear she might end up going back to RHATO, which I would LOATHE. Other than that, not much else to discuss. 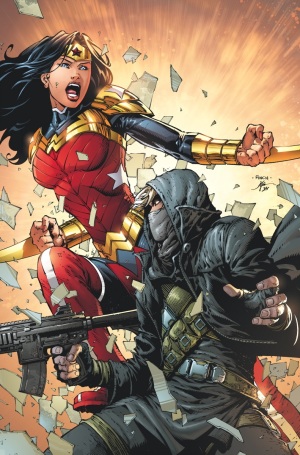 Like I said earlier, the team of Marguerite Bennett and Jason Fabok on Wonder Woman would be awesome if it comes to be. The silhouettes for the official image for Rebirth suggest the return of Wally West as Kid Flash, which could prove interesting for The Flash, and there looks to be a female Green Lantern, which could be Jessica Cruz, and after recent events with the Green Lantern Corps, they could use the new recruits who are already a little experienced with Power Rings. It’s looking like Earth 2 might be reverting back to a more traditional look and feel, especially if I’m right about who that is second from the left behind the curtain of the Rebirth image. And I couldn’t help but notice both Ted Kord and Jaime Reyes appeared in the video, so seeing that there’s a Blue Beetle comic involved raises some questions, like are they going to be working as a duo of sorts. And Hellblazer…Look, I don’t really care about Constantine. I find him to be a major horse’s ass, personally speaking. But, I know a lot of people DO care, and were pissed when his show got cancelled rather quickly, so I will say that I’m glad those people are getting their fill of Constantine, both with this comic and with his appearances in Arrow. Oh, and lastly, I’ve heard that Rebirth will apparently include what Dan Didio calls his most controversial moment ever…Dear God, save me. -_-

Anyway, those are my thoughts so far. If anything else comes up that I’m personally invested in, I’ll go ahead and give my thoughts on it. Be sure to leave your own thoughts below, and we’ll see what goes on from now ’til June. Ja né!