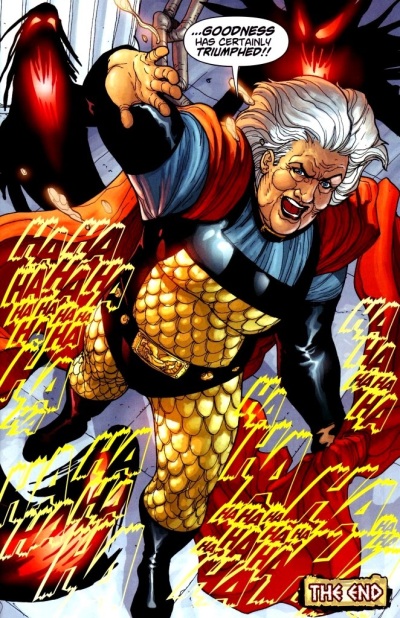 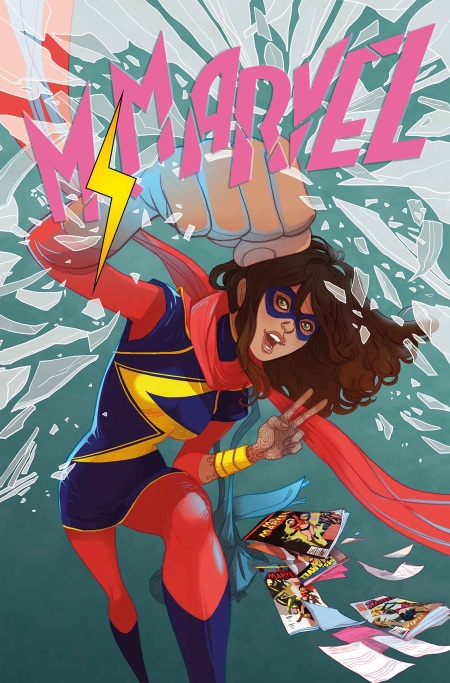 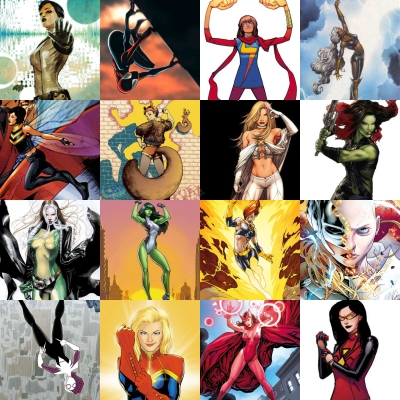 Welcome back to Marvelous May! Well, here we are, the second of the semi-final match-ups: It’s Kamala Khan, AKA Ms. Marvel, vs Gamora! 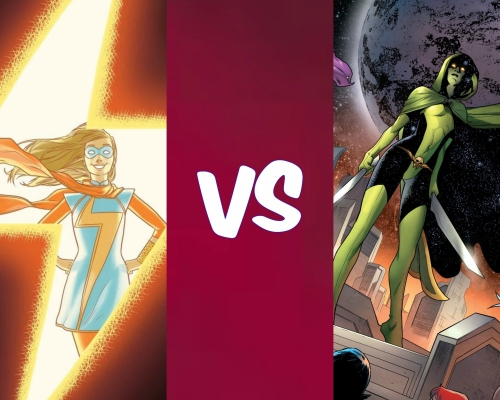 And, with that, the final four of Marvelous May are made official. Two of these incredible superheroines will move on to the finals, and one will become the champion of the Marvelous May fan-vote tournament. So, feel free to vote on this match-up, and if you haven’t already, go vote on She-Hulk vs Jane Foster. Then, be sure to check back in on May 23rd to see who the Marvelous May finalists are. Ja né! 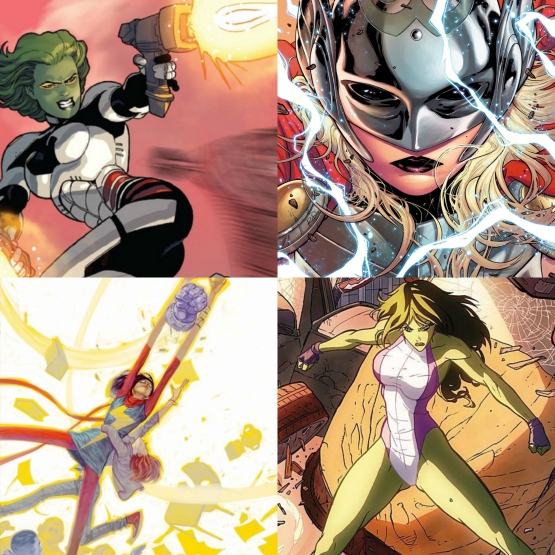 Marvelous May – Gamora vs Rogue

Welcome back to Marvelous May! Today, we’ve got one of the most badass Guardians of the Galaxy up against why-the-hell-does-Fox-refuse-to-actually-let-this-girl-be-the-badass-we-know-she-can-be, with Gamora vs Rogue! 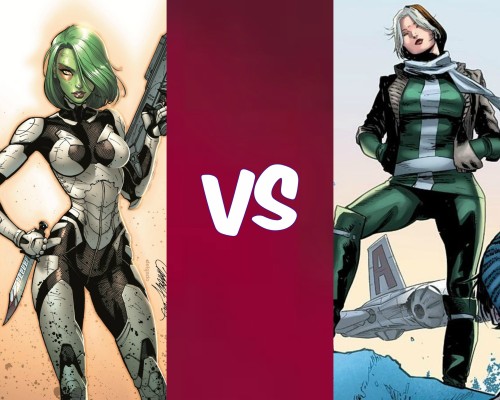 …No, seriously, how come Rogue is never allowed to be a badass in the X-Men movies? I mean, I guess you could say that it’s because, in this universe, there’s no Carol Danvers for her to get her more well-known power-set from. The super-strength, the ability to fly, and the seventh sense that lets her predict her opponents’ next moves. Fair enough, but there have been plenty of times in the comics where she’s been without Carol’s powers and remains the awesome X-Man she’s always been. It just feels like a bit of a waste of her character to have her be the one that always needs saving. 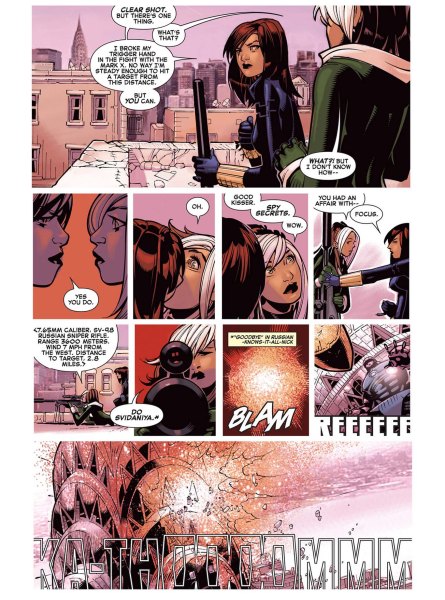 Anyway, feel free to begin voting. You have until May 17th, at which point, one of these two will take on the winner of Ms. Marvel vs Spider-Gwen. Until then, you know the drill: Click the links below to learn more about these two, and check in on May 15th for the first match-up of the semi-finals. Ja né!

Marvelous May – Storm vs Gamora

Welcome back to Marvelous May, and today, it’s X-Men vs Guardians of the Galaxy. It’s Ororo Munroe, aka Storm, vs Gamora! 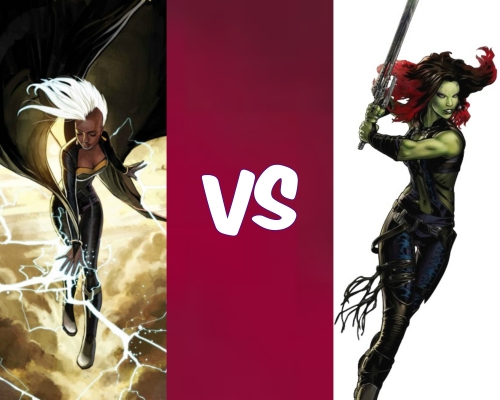 Descended from a line of African priestesses, Ororo Munroe lost her parents at a young age when a plane crashed into their home in Cairo. Afterward, she was trained by street urchins to be a master pickpocket. Wouldn’t you know it, she one day picked the pocket of one Professor Charles Xavier, founder of the X-Men, who kept an eye on her over the years, as he sensed she was a Mutant. Eventually, her powers manifested to allow her to save the life of a young Wakandan Prince, who would later become Black Panther. She was then taken to Kenya to be trained to use her powers responsibly, and was believed to be and worshiped as a Goddess. This is where, during a time period where the X-Men needed new members, Ororo was found and recruited, taking on the name Storm. She possesses atmokinesis, allowing her to manipulate the weather to her liking. Wind, rain, lightning, and snow all bend to her command, as she can create or control storms, and use the wind currents to fly. Unfortunately, the events that resulted in her parents’ death left her with a horrible case of claustrophobia, and her emotional state ultimately effects how well she can control her powers. That said, when she’s in full control, few can hope to stop the sheer force and power of Storm.

So, right off the bat, two things that people might not know about Gamora: She’s originally from an alternate universe, meaning she’s not actually native to Earth-616, and her full name is Gamora Zen Whoberi Ben Titan… … …Yeah, if it’s all the same with her, I’mma just call her Gamora. 😛 She’s the sole survivor of a race from her universe and someone brought her over to the mainstream Marvel Universe to save her. Problem? Her savior was Thanos, who molded her into a weapon, and a damned efficient one at that. She is considered the most dangerous woman in the universe, being trained to be an expert markswoman, a weapons expert, and a skilled martial artist, and all of that is on top of her natural abilities as a Zen Whoberis, which makes her super strong, super fast, and so on. Luckily for Gamora, she one day learned of Thanos’ ultimate plan: To kill the entire universe in a bid to impress Death…because Death is an actual person in the Marvel Universe, AND a woman, and he is trying to woo her by killing EVERYONE. Yeah, clearly, he’s not all there, but really, what would you expect from someone called the Mad Titan? She’s since switched over to the side of good, working with a few different heroes from time to time, until she eventually found her home with a rag-tag group calling themselves the Guardians of the Galaxy. It’s a decision that seems to be working out for her, and has led to her being empowered by the Black Vortex, which gave her the ability fly, survive the vacuum of space, and basically access hammerspace. And hey, who wouldn’t wanna ride with an anthropomorphic raccoon with guns, a Captain Kirk wannabe, a giant tree with a three-word-long vocabulary, and the former WWE World Heavyweight Champion?

Anyway, be sure to vote on who you think should win this match by May 12th, at which point the winner will move on to take on the winner of the next bout. And be sure to check out the links below to read more about these two, as well as come back for the final match of the first round: Rogue vs Jean Grey. Ja né! 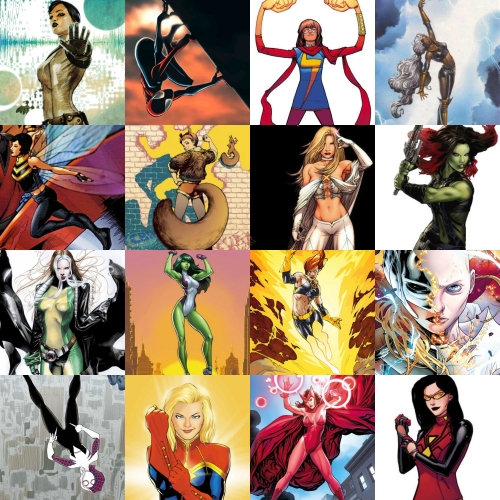