Well, the weather outside is a tad bit frightful, so I thought I’d light a fire a little more delightful to warm everybody’s hearts. Here are 5 of my favourite kisses from DC Comics, cartoons, and whatnot, be they romantic, platonic, or otherwise. (You’ll see, lol) Just a warning, there are same-sex kisses here. If you aren’t a fan of that, might wanna leave now. 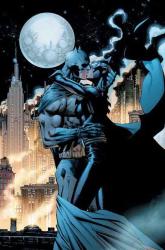 Remember when a bat loving a cat was one of the most romantic things in the freaking world? I know I do. And of all the kisses, the sex, etc. between these two, I think most people can agree the single most romantic scene between the two was in Batman: Hush. They were kinda reduced to just being groin buddies in the New 52, but recent events have suggested that they’ll be growing toward a more romantic coupling soon enough. Personally, I’m COMPLETELY for this.

Okay, I HAD to throw in a funny one, leave me alone. lol So yeah, if you don’t know, here’s the scenario: Supergirl is breaking up a robbery by Harley Quinn and Poison Ivy, so Ivy decides to try out a Kryptonite lipstick and see if she can mind control Kara. Not only did it not work, but Pam wound up becoming Kara Zor-El‘s first kiss. I don’t know if they ever played up on that, by having them be awkward adversaries, but I know it would’ve made for some hilarious stories. 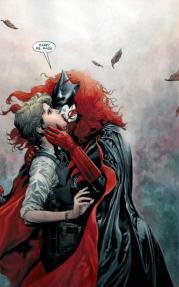 Continuing with the lady-love theme, here’s the one that actually got me to squee. No, really, go back in my blog to before I was even officially reading Batwoman. I completely squee’d for this kiss. Sadly, DC decided to pull the plug on the marriage, but the two are still together, so perhaps the relationship can last long enough for the higher-ups to change their minds.

…Okay, I lied, I had to have two funny ones. XD After Harley has probably one of the worst days of her life, where she was, and I quote, “Sick of everyone tryin’ to shoot me, run me over, and blow me up!”, Batman saves her life, then delivers the new dress she bought earlier to her at Arkham, at which point she kisses him not once, but twice, much to the amusement of Robin and Ivy. She then tells Batman to call her, although Batman suggests that she doesn’t push her luck, but I can’t help but wonder what ‘Mistah J’ might’ve been thinking if he’d either seen it or heard about it. XD 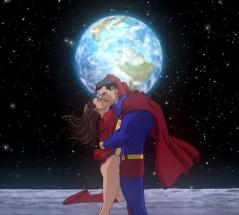 Remember how I said Batman and Catwoman’s kiss in Hush was one of the most romantic things I’d ever seen? With the glow in the moonlight? Y’know the one way you beat that? By actually being ON THE MOON! And of the many kisses Superman and Lois Lane have shared, this was easily the greatest one, at least in my opinion. And I guarantee, with the number of Lois and Clark moments they’ve been replicating with Superman and Wonder Woman in the New 52, I just know that, at some point, they will try to copy this. My advice? Don’t. In fact, I don’t get why you’re copying all the Lois and Clark moments thus far. If you want people to like the Diana and Clark relationship and stop freaking BEGGING you to bring back Lois and Clark, the LAST thing you should be doing is copying that relationship. You need to give them something new, different, and likeable, and with maybe one exception, I haven’t seen that yet.

So yeah, those are my 5 favourites. However, there are a lot of other good ones, some shared by the same people shown here, some not, and I know a lot of people probably have some favourites that aren’t seen. So, just for the hell of it, here’s a bunch more of my favs. 😀 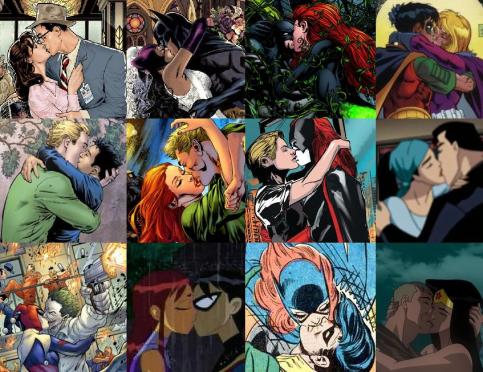 …Man, for two people who were suggested to be gay for each other years back, Batman and Robin sure do get around a lot with the ladies. XD Anyway, lemme know if there’s a favourite of yours that isn’t present, or just talk about your favourite DC kisses in general. Ja né!