…Well, here we are, the last issue of Poison Ivy: Cycle of Life and Death, and what’s going to be one of, if not THE last time, I look at something from the New 52. How does it fare? Well…it’s okay, but it involves yet ANOTHER character coming in to deal with the situation, and it has a cliffhanger ending that I’m worried will never get followed up on. I mean, I get why Amy Chu felt it had to end this way, and I’ll get to that in a bit, but suffice to say, it’s a little aggravating, though it’s at least a better ending than I thought we were gonna get for a while. Anyway, before I go into what I liked and disliked about this issue and the series as a whole, I need to do a quick look at the plot for this issue, so yes, SPOILERS AHEAD. 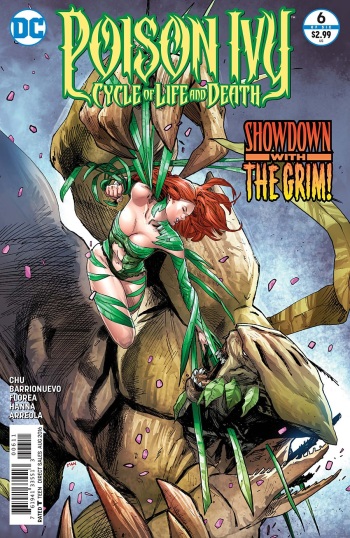 Thank God, her outfit on the cover isn’t her costume in the comic. lol

So, long story short, it turns out Grimley was the one behind the murders and the theft of Pamela’s research, meaning Victor from issue 4 was actually working for him. While his body WAS found dead at the end of issue 2, it turns out he sort of left it behind like a cocoon. It’s also hinted that he may have been behind keeping the cops off Ivy, as well as outright stated that he put a halt to the police investigation of the lab, since her staying in the game was required for his survival. Doesn’t completely excuse the two incompetent cops, but whatever. Point is, Grimley needed Pam’s research because he found it could help battle his cancer. Unfortunately, not only has it transformed him into a monster called the Grim, but his cancer came back anyway. He needs the Sporelings’ cells to stay alive, and doesn’t care if it kills them. Luckily for Ivy, Darshan came and freed the kids from Ivy’s cage so they could help her, but that isn’t quite enough to seal the deal, so naturally, what else should happen but Swamp Thing showing up to save the day. He punches a hole through Grim, who falls on Darshan, but Darshan lives because main character shields, Grim gets back up, grabs Rose, they fight again, and then Thorn HACKS GRIM APART WITH A MACHETE and drops his pieces in the river where they dissolve for some reason. DAMN, GIRL. O_O Anyway, Darshan makes a couple of WWE gags toward Swamp Thing that made me giggle, he takes the girls back in, and Alec talks to Ivy about how she might not have thought bringing the Sporelings into the world all the way through, but that they’re her responsibility. She needs to look after them, but she can’t keep hiding them forever, and that while people like them might be unique, they aren’t alone. As such, Pam finally decides to call Harley to try to make amends, but as she goes back into the house, the Sporelings are gone. Turns out that Darshan, knowing they’d try it with or without his help, got them to the Gotham Bus Terminal without anyone spotting them and I guess provided them fare to get out of Gotham. Apparently, they realized that the cops would come looking for them after what happened in the club and have decided it’s best to take off, but it’s hinted that they also have plans to “change the world”.

So, let’s talk about what I liked about this issue specifically first. While the art team is very clearly there to fill in the work for Mann, as he was leaving to start early work on Trinity, they nonetheless pass in a decent job…Well, okay, let’s just put it this way: For a last-minute change, the art could’ve been a LOT worse. We’ve all seen how those can usually end up in the past. While you all know my issues with killing, especially in the case where Grim could be brought back as a recurring member of Ivy’s rogues gallery, I get that this is a mini-series without a guaranteed continuation later, and that it wouldn’t be the hardest thing in the world to bring him back if it does. And while I made a joke about how Darshan survived where he probably shouldn’t have been able to, I AM glad he lived, and comprehend that he understood that the girls were gonna leave Gotham with or without his help and thus did what he thought was right. Even if the ending hints that he wasn’t necessarily, it’s easy to see where he thought he was. I might’ve done the same, honestly. And I’m glad that Ivy finally decided to call Harley in the end. While I’m not always a fan of how the two are written together nowadays, I AM still a fan of their pairing, and it’s good to see Pam acknowledge that she has people in her life that she loves.

And now for what I didn’t like. First off, while it’s always awesome to see Poison Ivy and Swamp Thing kicking ass, Alec showing up kinda hijacked the plot just a little bit, especially with how easily he brought down Grim at first. That said, I was kinda hoping that, should Swamp Thing make a cameo, it would tie into the fact that Ivy was tasked with regrowing his body after what happened in Justice League United, and that maybe regrowing him led to a breakthrough that showed Ivy how she could create the Sporelings in the first place, but no such luck. Speaking of, THAT ENDING. Look, I get that Amy Chu is trying to leave us with an ending where it’s suggested that this isn’t the end, or maybe to encourage the higher-ups at DC to either let her or someone else do something more with this story, but since we don’t know for sure that there WILL be a continuation, it instead feels like…the end of Sonic SatAM, I guess is a good example. Speaking of, I think it’s hinted that the girls might be in the midst of a heel turn with that ominous final line, but again, I can’t be sure, because for all I know, we’re never gonna see them again. Also, I get what they’re thinking with leaving, but I don’t think THEY thought it all the way through. So, basically, they’re leaving because they’re worried the cops will come after them and that it’s safer for everyone if they just weren’t around. Okay… … …except now, the only suspect left is Poison Ivy, and there’s no one left to cover her trail for her. Hell, take it a step further from that, and assume they eventually link Darshan to her. Between the lab and everything else, they’ll think she was behind everything and that he was an accomplice, which could end with him going to frigging Blackgate. Alternatively, you could’ve turned yourselves in and spared those you care about by claiming full responsibility. Granted, still not a great solution, and might’ve ended with Ivy being chased by the police anyway, but still comes off as a bit more selfless and thought-out than running away.

So, overall, what are my thoughts on the Poison Ivy mini-series? Well, it’s kind of a mixed bag for me. When it does well, it does really well, but when it does poorly, it’s really aggravating to me. Granted, that could just be because of how I personally view Ivy, and how much I want her to have a good solo title, but it’s also possible that the book had problems. Members of the art team having to tag out because of work elsewhere, story elements having to be rushed and blended in together because of the nature of the book being a six-issue mini-series, kinda conflicting messages as to whether or not Pam thinks it’s okay to kill, and characters coming in to hog the spotlight. On the other hand, though, when Ivy is in the zone, it’s awesome. She’s a brilliant-minded woman, but one who is capable of making mistakes and not thinking things all the way through, which just goes to prove that she IS human. Again, Darshan was a delight, and if this DOES get an on-going later, I’d love to see him back. I’m also glad he’s not involved simply to be a love interest. The mystery, while not exactly having the best structure in terms of giving the reader a chance to piece it together themselves along the way, at least makes sense by the end, and provides Ivy with someone she could have a longtime feud with, should the writers choose to do so. So, like I said, it’s a mixed bag, but one that I think provides the potential for a far better ongoing solo title. That said, I WOULD have to insist that the book simply be called Poison Ivy. I get the need for Cycle of Life and Death here, but for the ongoing, just Poison Ivy is fine. Overall, I definitely don’t regret buying this book, and I would encourage all of you who haven’t yet and want DC to make a Poison Ivy ongoing solo-title to do so. Hell, you might even enjoy it more than me, since I maybe have a tendency to over-think certain stuff. 😛 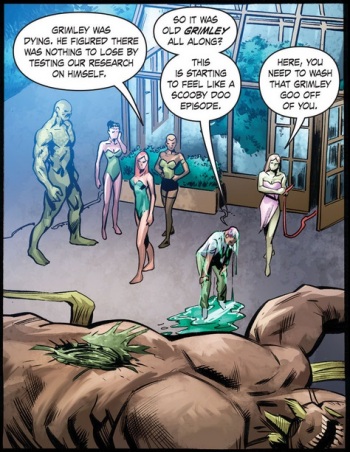 Ha ha, it’s funny because Scooby Doo’s the next thing DC is planning to make more modern and edgy. -_-

Anyway, lemme know what you all thought of this book, and let’s hope that the sales and overall interest are good enough in the end that DC makes an ongoing Poison Ivy Rebirth title. Either way, though, for those that read this and have been members of the Poison Ivy League, remember that we made this happen. So, regardless of what’s done with this from here on out, this was nonetheless a victory where some thought it couldn’t be attained, so pat yourselves on the back for that. Ja né!

…Well, I SAID I’d like to go awhile without talking about the New 52, but as a longtime member of the Poison Ivy League, I feel obligated to share this link and then review the comic next week. So, here are the preview pages for Poison Ivy: Cycle of Life and Death #6.