6 Questions I Have Going Into Pokémon Sun & Moon’s Release

So, I know it’s been a while since the last real article I’ve written. Naturally, first time I actually sit down and do so, it’s Pokémon related. Thanks to a gift card I got last year for Christmas, I have ensured that I will be able to get Pokémon Sun. So thankfully, not getting left outta this one, which means I can allow myself to get as hyped as everybody else. Also, it means I can start racking up the questions about the game and what to expect from it. So, with that said, let’s take a look at a few things I can’t wait to learn about Pokémon Sun & Moon, starting with…

#1 – Are the Alola Form Pokémon only from Generation I?

I figured I’d start with this one, because it feels like I already know the answer. And in case you’re wondering, right now in my head, I’m thinking the answer is yes, all the Alola Form Pokémon are Generation I Pokémon. Here’s what makes me think that: It’s the 20th Anniversary of the original games. Said original games have been re-released on Virtual Console, and the Pokémon from those games can even be transferred all the way up to Sun & Moon. I feel like this was done to give them something new. And frankly, I can’t help but notice at least five Kanto Pokémon are now getting the Dark-type, and I’ve always kinda wondered why it didn’t happen back in Gold & Silver. That said, there are plenty of other Pokémon from other regions that could’ve potentially gotten regional variants, and I hope that the concept isn’t tossed out when it comes to future games. This is actually a really neat idea, one I’m surprised hasn’t come up until now (not including the Orange Islands from the anime), and one that can be revisited later on. I also can’t help but notice that all of the Pokémon announced to have Alola Forms do not have Mega Evolutions, nor do I think they’re going to. Which leads me into the next question…

#2 – Are there going to be new Mega Evolutions?

The Mega Evolutions were a bit conspicuous by their absence from the trailers for a while. Then, just recently, we’re told about how the new Z-Ring allows us to Mega Evolve Pokémon again. However, there were no new ones shown, only the ones revealed in Generation VI. This has led to the theory that there will not be any new Mega Evolutions in Sun & Moon. I’m personally inclined to believe it, though I’m a bit disappointed in that if it’s true. I felt like there were still at least another handful of classic Pokémon, and maybe even some newer ones, who would’ve benefited from being able to Mega Evolve, and even some who honestly felt like they SHOULD have gotten them but didn’t. So I’m hopeful that I’m either wrong or that Mega Evolution is expanded upon in later games. But speaking of carry-overs from Generation VI, that brings me to…

While Omega Ruby and Alpha Sapphire’s main game kinda left me feeling a little disappointed, I LOVE the idea of a post-game episode. As for what they could do for one in Sun & Moon, I say use Zygarde. We’ve already confirmed that one thing you can do in the game is collect Zygarde Cells, and that the different forms shown off in the anime will be in the game. Also, there was no third version of X & Y, the rumoured Pokémon Z. So I say just go all out and have a special post-game episode for Zygarde. The Z Episode, if you will. Maybe even have it follow up on plot points from X & Y? And hey, we know Ash-Greninja is in the game via the demo, so involve it too. Oh, and just as a real quick side-question, are we getting any other Pokémon with Battle Bond, or is it just gonna be Greninja? ‘Cuz I thought what they were gonna do is have all the fully evolved Kalos Starters be able to do it, and have them appear in Pokémon Z. But then, Pokémon Z never happened. But, like I said, if they do a Z Episode, they could follow up more on the Kalos Pokémon by doing just that.

#4 – What are the Ultra Beasts really?

Okay, strap yourselves in, folks, because I’m about to go all Game Theory on y’all for the next few ones. So, we’ve come to learn about new creatures called Ultra Beasts, who seemingly are neither Pokémon nor humans, meaning they’re some kind of third race. And yet, not only do the Ultra Beasts have at least some characteristics to them that we could potentially see them as being Pokémon, they also have some characteristic in common with humans. A body builder, a beauty, a little girl. Then I remembered a book in the Canalave Library which spoke of a time when humans and Pokémon ate at the same table, with some translations apparently suggesting humans and Pokémon had interspecies marriages at one point. And yes, as an internet personality, I am DEEPLY horrified by the fact that this makes a lot of the Rule 34 fics about Pokémon and their Trainers debatable canon. XP Regardless, though, this could hint at a potential link between the two species. So, if that’s the case, what’s to stop someone from taking the DNA of humans and Pokémon, putting them in a test tube, and seeing what comes out? Is it possible that the Ultra Beasts are the offspring of humans and Pokémon? COULD. IT. BE??? Well, all things considered, I can think of one other thing that suggests that… 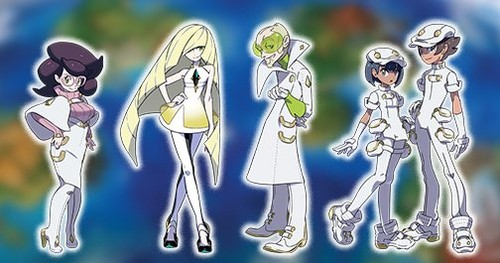 #5 – What are the Aether Foundation’s true motives?

Let’s unpack this one, shall we? How many times have we encountered scientists that went down the wrong road in these games, not necessarily for evil but for misguided reasons? And isn’t there a Synthetic Pokémon in the new games that was created with the intent to be as strong as the Mythical Pokémon, and evolves to gain an Ability akin to Arceus, accepted by many to be the Pokémon World’s GOD? And isn’t it odd how the only person confirmed at this time to have a Type: Null is Gladion, the Team Skull enforcer, who is in a directly antagonistic relationship with the Aether Foundation? And isn’t it interesting how he and the President of the Aether Foundation, Lusamine, have the same coloured hair and eyes? And isn’t it a nice little turn of events where the Aether Foundation is allegedly conducting research on the Ultra Beasts, who look like they may or may not have been created in a lab? All of this is painting a very dark picture of the Aether Foundation. Not saying Lusamine or any of the current members are evil, just that the organization they all work for might have a dark past they don’t want everyone to know about, and may very well be even trying to make up for. And frankly, I hope I’m right, because that would be a SWEET twist, and we haven’t had a REALLY good plot twist in the games for a little while now.

#6 – How many Trial Captains and Kahunas will there be?

So GameXplain, the reason I don’t do Evaluating Time anymore because…well, really, what’s the point when they do a MUCH better job in my opinion, recently asked a simple question: How many Trial Captains and Kahunas would there be? And frankly, I’m kinda hoping it’s their answer of 14 Trial Captains and 4 Kahunas. Why? Because then each one can specialize in each type of Pokémon and none get left out. You all remember how many times I complained about there being no Dark-type Gym in any of the past games, after all. The only thing that complicates that is that I have no idea how you divide 14 captains among 4 islands, but whatever.

Anyway, let’s hope we don’t have to wait long for these answers. For now, lemme know what you are dying to know about the games in the comments below, and we’ll see what happens next month when the game comes out. Ja né!