J.A. Phillips Presents Batman And Robin: Dark Knight/Boy Wonder Preview + Which Villains Would You Like To See In This Fanfic?

Dick Grayson could barely manage to keep his heart from pounding clean out of his chest. This was going to be one of Haley’s Circus’ biggest shows yet: Amusement Mile, Gotham City. Who knows how many thousands of people in attendance. Dick and his family, the Flying Graysons, performing their signature trapeze act without the safety of a net. And all of it sponsored by billionaire philanthropist, Bruce Wayne.

Without a doubt, this was going to be a night the 12-year-old boy would never forget.

Bruce Wayne couldn’t help but feel a little excited. It’s true that, despite the life he lived, both what the public knew about and what they didn’t, there wasn’t much that made him excited in a legitimately happy and positive way. Still, if there was one thing he still had a love for, it was the circus, and having heard about the Flying Graysons, one of the star acts of Haley’s Circus, he knew he was in for one hell of a show.

There wasn’t a doubt in his mind that this would be a night he’d never forget.

…So yeah, I’m doing this now. lol More-or-less a fixfic of All-Star Batman And Robin, I figured it was either put up or shut up time for me, since I gave my thoughts on how I’d do the story different. Suffice to say, though, because I had to make so many changes to the story, replacing the unintentionally hilarious dialogue and the subplots that make EVERYONE involved look bad, plus making the characters feel more like who they’re supposed to be and removing anyone who didn’t need to be involved, I’ve had to read/watch some additional content to gain further inspiration. Specially, in addition to ASBAR, I’ve read Detective Comics #38 (the part about Robin’s origins, anyway) by Bill Finger and Bob Kane, Nightwing #0 by Tom DeFalco and Kyle Higgins, and The Untold Legend of The Batman #2 by Len Wein, as well as watched Robin’s Reckoning Parts 1 & 2 from Batman The Animated Series, and A Matter Of Family from The Batman.

With all of that said, though, I always like to have a certain degree of input from my fans. And, in this case, I wanna ask if there are any members of Batman’s rogues gallery that you’d like to see in this story. After all, due to the subtraction of anything related to the Justice League in this story, and the fact that the story was never finished and could have a stretch of time leading to the confrontation with the Joker, there’s plenty of room for Batman and/or Robin to interact with various baddies. Keep in mind, though, that the villains present will be those that best fit within the context of the story, and that this story is more-or-less meant to be continuity free, meaning you don’t HAVE to read other Batman stories in order to understand what’s going on and who these people are. 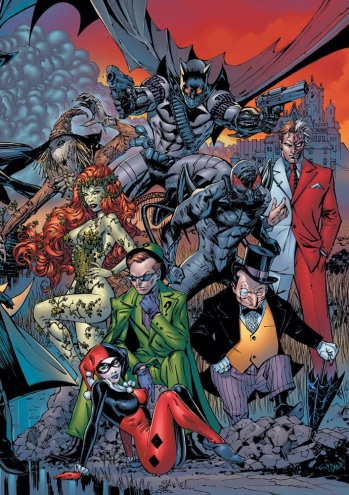 So yeah, lemme know who you think would be a good fit for rogues whom Batman and Robin could encounter in this story, and we’ll see what happens as I continue writing this story. Ja né!