Well, it’s been a while since I posted a new chapter of Primal Strife, due to a combination of over-brainstorming, being distracted by other stuff, and just wanting to leave readers in suspense after last chapter ended with essentially a motha fuckin’ T-Rex. So, here’s an early preview of Chapter 13! And as always, remember this story is rated M, except on AdultFanFiction, where the uncensored version is posted. 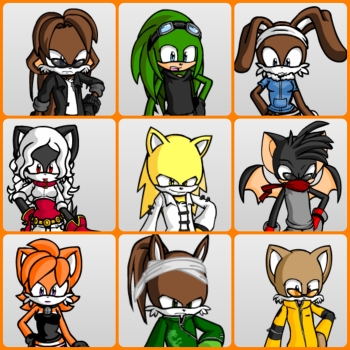 …So, suffice to say, we were not having a good last day of our trip to the Viridian River. Looking to my sides, taking a quick survey of my team, I could tell we were not looking good. Garrison’s arm was a bloody mess, Jacob’s wing was torn, Katrina was a little cut up, and Percy was trying his best to see to all three of them. Meanwhile, the rest of us were all a bit shaken up and low on ammo, and now we were facing off against a Reptile Hairless, one of the absolute last things you EVER want to find yourself up against. This was going to suck, BADLY.

“Stay clear of her bones and claws,” I advised as calmly as I could while I readied my rifle, Cory reloaded his revolver, and Claire tightened her gloves. “They can stab and shred you apart before you have a chance to realize what happened.”

The massive Hairless let out one earth-shaking roar before lunging at us, her teeth ready to chomp down on us. Before she could, though, Claire leaped up and punched it hard in the snout, while Cory and I rolled to opposite sides and opened fire on her eyes. For the brief moment that this left her stunned, Tracy quickly let loose a spray right into the Hairless’ open mouth, probably hoping to make her back off…It didn’t work out so well.

I barely managed to even see it when it happened. All I know is that, following this initial attack, the Hairless swung her giant, spiky tail around. I just barely managed to duck and roll under it as it threatened to slam and skewer me. Tracy, however, wasn’t so lucky. While she managed to avoid the spikes, the tree trunk-like flat of her tail managed to plough into her side, sending her tumbling end over end across the ground.

“TRACY!” Jacob screamed, immediately forgetting the state of his wing and hurling shuriken after shuriken at the Hairless. Meanwhile, Claire, having held onto the giant’s nostrils, was now on top of her head, throwing relentless fists into her face, giving Cory a chance to grab Tracy and pull her out of the Hairless’ immediate vicinity.

“Claire, get down!” I yelled, taking shots at the Hairless’ underbelly.

“Don’t have much CHOICE!” Claire screamed as she was suddenly thrown off the Reptile’s head, flailing in the air. Jacob managed to leap up and catch her before she hit the ground, but his wing gave out almost immediately, causing him to crash into the side of the Nova. The Hairless opened her jaws wide and charged at them, clearly about to chow down on them, until an orange and black blur rocketed across the side of her face, actually managing to leave a sizable slash mark across her cheek.

“Kat!” I shouted as the tiger rolled and landed nearby. “You sure you’re alright?!”

“I’ve been worse!” Katrina replied as the Hairless instead turned her attention on us.

Looking just behind the giant Reptile’s foot, though, I spotted Garrison using his teeth to ready an explosive arrow on his crossbow. Realizing his plan, I began unloading every round I had into the Hairless’ skull, keeping her attention on me. Katrina soon figured it out, too, scooping up Tracy’s fallen pistol and shooting at the Hairless’ eyes. Before the Hairless could chomp down on us for the constant aggravation, though, Garrison managed to fire the arrow directly into her hide and quite literally blew her ass clean off. Kat and I got out of the way as the Hairless tumbled forward, her back end and tail a gruesome mess.

“…Holy shit,” Cory muttered as we regrouped. “Seriously, you need to start making more of those arrows.”

“That’d be great…” Garrison moaned, lowering his arm as Jacob and Claire slowly scaled down the RV, “…if I weren’t out of materials. That was my last one.”

“Tracy?” Jacob inquired to Percy, who was looking over the fallen skunk.

“She’s definitely got at least ONE cracked rib, possibly more,” Percy replied as Tracy gasped in pain before looking to Jacob’s wing. “…I think you aggravated it.”

Jacob glanced down at his wing, now dripping in blood. “You don’t say?”

“Head’s up, guys!” Claire yelled, pointing to the stirring Hairless. “She’s not done yet!”

Sure enough, just a couple seconds later, the now bloodied and VERY angry looking Reptile Hairless was back to her feet, glaring holes through us. Opening the pouch on my belt with bullets, my heart sank as I found only one left. Looking to the others, it was clear they were all either out of ammo or close to it. Garrison scoffed, using his teeth to free his crossbow from his wrist.

“You’ve only got one good arm!” Percy insisted.

Garrison nodded, eyes on the Hairless as he prepared the claws on his left hand. “That’s one more than she’s going to have when I’m done.”

And that’s all for now. Lemme know what you think, and be sure to read the full chapter when it comes out, either on FictionPress or AdultFanFiction. Ja né!

Okay, so if you’re like me, then when you see people playing LEGO Marvel’s Avengers, you think “If/When I get this game, the first thing I wanna do is unlock all my favourite characters”. Well, on the off chance that your favourite character is one of the newest members of the Avengers, Kamala Khan, here’s exactly where/how you can find and unlock her.

How to unlock Kamala Khan (the new Ms. Marvel) in LEGO Marvel’s Avengers and some open world free roam gameplay with her are shown in this video. Kamala Khan’s character token can be found in the South Africa Hub where you have to escort her on a mission to take the best selfie with Hulk.

More character unlocking guides and free roam gameplay can be found in the playlist: https://www.youtube.com/playlist?list=PLlrg0heA7D47GFJyGj1wWOPOCl6frUGKo