Jyger’s Favourite 5: My Favourite Things To Watch/Read/Etc. During The Holiday Season

So, everyone has their own traditions for the holiday season. However, from the geek front, it’s always interesting to see what some people will read or watch during said season, like Christmas specials, certain December internet reviews, holiday-themed comics and fanfics, and so on. So, with that in mind, here are some of mine in no particular order, starting with what I’m sure many will probably consider a bit more of an unusual pick…

…Yeah, see what I mean? 😛 Here’s the basic plot: Locke, the main character, lost her backpack in an earlier chapter of the story, so her team decides to take up various jobs to pay for a new one. Throw in every single hilarious and heartwarming moment you can think of that fits said story, as well as the personalities of the Pokémon involved, and you’ve got yourself an enjoyable romp. And don’t worry, even though it’s a Nuzlocke comic, this is strictly holiday fun, so no horrible deaths or the like.

#2 – Reichenbach’s The Relevance of Christmas, a Batman fanfic

Again, a little weird, but awesome. Dick Grayson and Damian Wayne, still serving as Gotham’s Batman and Robin while Bruce is believed dead, celebrate Christmas. Only problem? Damian doesn’t believe Christmas has any kind of significance. The resulting actions by Dick are freaking HILARIOUS. I won’t spoil what he does, but I’m just gonna say that I crack up laughing EVERY TIME I read it. And since we’re on superheroes for the moment, that leads me to the next one on my list… 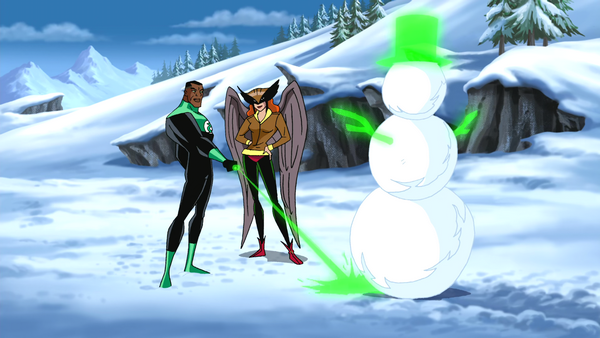 #3 – Comfort And Joy, the 49th episode of Justice League

Thankfully, NOT a story where Batman has to find the Christmas spirit. lol No, in this episode, there’s three stories going on: One where Superman brings Martian Manhunter to his folks’ for Christmas, one where The Flash is trying to get a gift for some kids at an orphanage, and one where Green Lantern and Hawkgirl spend Christmas together at an alien bar. It’s a nice, quick, heartwarming Christmas episode starring some of my favourite superheroes. Could I ask for more?…Well, yes, but I like it nonetheless. lol

#4 – Atop The Fourth Wall, Batman Noël, and Nostalgia Critic, A Christmas Tree

I couldn’t decide for sure which one of these two to put on here, so I opted to just do them both. Now, for the most part, I of course lean toward Atop The Fourth Wall. If you don’t know why, well, it’s because of the feels. Seriously, if you’ve never watched this episode, or any of the episodes in this particular story segment, do so NOW. Just be prepared for possible tears. As for the Nostalgia Critic episode, though, it’s mostly for Doug’s speech at the end…That, and the fact that A Christmas Tree really IS the worst holiday special I’ve ever seen, at least animated anyway. And, while we’re on the subject of the content being reviewed, I really DO need to get a copy of Batman Noël one day.

…Yeah, you knew SOME version of this story was gonna make it on here. lol And while there are plenty of versions I really like, I gotta go with the Muppet one. Not only are the performances great, but I love the songs. In fact, even if you don’t necessarily like the Muppets, the soundtrack is still worth listening to. Otherwise, it’s the frigging Christmas Carol. It’s like THE Christmas story. Sure, a lot of people think it’s done too much, but hey, there’s a reason for that.

And those are five of my favourite things to watch/read/listen to around Christmas time. There are a few more, of course, but I think I’ll save them for another list someday down the road. Until then, lemme know some of your own in the comments. Ja né!