← My Thoughts On The Black Widow/Age Of Ultron Situation
Review: Silk #4 →

And The New Thor IS…? (WARNING – SPOILERS)

So, ever since the reveal that there would be a new Thor close to a year ago, the question on everyone’s minds was “Who is she?” Well, now we know. Well, actually, a lot of us knew yesterday due to a leak leading to Marvel deciding to come out publicly about it (I wonder if they blamed Hydra for THIS one too), but because there were those I knew on social media that made the choice not to read the spoilers and instead read today’s Thor #8 to find out who the new Thor was. So, now that the book is out, I’ve decided to go ahead and give my thoughts on the matter. With that said, let’s go ahead and just say it: The new Thor is Jane Foster. 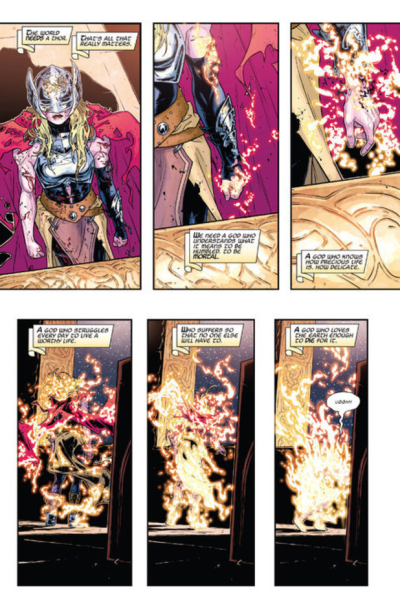 Yup, totally thought it was Roz Solomon, didn’t you? Apparently, so did Odinson. He totally believed by this issue that it was Roz, and then she walked up to talk to him and Thor and he had this look on his face like he was completely stupefied. Myself, while I suspected heavily that it was Agent Solomon, part of me was also secretly hoping for…well…

Well, except replace Vince McMahon with Loki, and Steve Austin with Prince Odinson. In fact, if Loki had said that exact phrase, I would’ve laughed until I peed. XD

So, let’s talk about this revelation, shall we? First off, it kinda makes me wonder if we’re ever gonna see Natalie Portman dressed as Thor in the future. ‘Cuz I’d be down with that. As for the comics, though, I like how this reveal, while it answers some questions, nonetheless leaves us with a lot more. Like, we can probably gather that the hammer called on Jane and deemed her worthy due to a combination familiarity with her and her understanding of what it means to be Thor, but it doesn’t answer HOW it called her. More-so, we still don’t know what it was that Nick Fury told Odinson to make him unworthy. What’s actually kinda irritating about that is that he was literally about to tell Jane, right as Roz ran up and interrupted them. But, my guess is that, now that we know who the new Thor is, that’s next on the list of things to learn the truth about.

But, to the point, do I like this choice? Honestly… … …Yeah, I kinda do. I would’ve loved if it turned out to be Loki, but honestly, this works too. Jane is someone who is ready, willing, and able to make the ultimate sacrifice play to be the protector of the ten realms. And while it’s always great seeing her fly around, kicking ass, and being a hero, I also really wanna see her make it through this okay somehow. I wanna see her somehow manage to survive her ordeal with breast canc-… … … …Wait a minute, when did the first issue of this series début?

…Aww, son of a bitch! During Breast Cancer Awareness Month?! How did I not piece that together before?! ROFL

Anyway, those are my thoughts on the reveal of the new Thor. And now that we know who she is, that should make things interesting for the foreseeable future, especially given her position on the new Avengers team. Ja né!

← My Thoughts On The Black Widow/Age Of Ultron Situation
Review: Silk #4 →