← Red Sonja #12 Review – Voilà! She Is Clean!
Batman Confronts His Family In This Exclusive Preview Of ‘Batman Eternal’ #26 →

Batman Endgame and Superman Doomed #2 News – Just When You Think You Have The Answers, The Questions All Change

Soooooo, couple of noteworthy things on the horizon that I felt like bringing to everyone’s attention. First up, there is a story arc coming up in Scott Snyder’s Batman called Endgame. He’s kept his lips as tightly sealed as possible, and the covers for the next few issues have been a complete mystery…UNTIL NOW, when we got an early look at the cover for Batman #35, which is part one of Endgame. 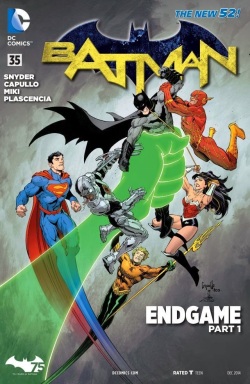 Basically, based on this, a few preview sketches that have appeared on occasion, and some rumours that have been floating about, Endgame will feature a confrontation between Batman and the rest of the Justice League, or at least some sort of situation that puts them at odds or creates distrust among them. And considering that Batman has collected little boxes with items meant to exploit each of the team’s weaknesses, tricked them so that he could break into the Watchtower and take his Hellbat suit to go to Apokolips to save Damian, stood up for Lex Luthor joining the team, and is generally the most paranoid and distrustful member of the group, I can’t possibly imagine how they could EVER be at odds. lol I will say this much, though: Ever since I saw that variant cover for Justice League drawn by Greg Capullo, I’ve been wanting to see him draw the Justice League in a book for YEARS. And because Scott Snyder is writing this story, I know I can trust him to write a story about the Justice League and Batman being at odds and have the proper balance in place, as opposed to making Batman look so much better than them just because he’s Batman. I HATE that shit.

But yeah, that’s the second biggest news I’ve heard today. THE biggest was made apparent at the end of Superman Doomed #2, when Brainiac, and by extension, the readers, were shown THIS…

HOLY FUCK, THEY’RE STILL AROUND! O_O …Okay, naturally this raises a few questions. Basically, here’s what I think happened: Either the pre-New 52 Multiverse never actually disappeared and has continued to exist along with the New 52 Multiverse (which shouldn’t be possible, but then again, when has that ever stopped them from doing something insane before?), OR there’s a world in the New 52 Multiverse that is a condensed version of the DCU’s history before the reboot in September of 2011. Now, either one of these explanations is, of course, a major continuity mess in the making, is almost certainly going to get worse far before it gets better, and is a weak attempt by DC to have their cake and eat it too…and I can’t even be mad! LOOK AT THEM! It’s Superman in his red trunks! It’s the Justice Society of America! It’s Harley Quinn in her old costume! It’s the New Teen Titans, with Donna Troy and the REAL Starfire before she became whatever the frak she’s supposed to be in Red Hood And The Outlaws! Okay, there’s also stuff like Nightmare Batman and the Flashpoint versions of Aquaman and Wonder Woman, but c’mon, it’s the pre-New 52 universe! There’s a good chance we could see more stories told of that universe in the future! Although, I gotta wonder what’s different with Batman and Green Lantern, since their New 52 stories started by more or less picking up where their old continuity stories left off. I mean, we’ve since gone back to show some of the stuff that’s the same and different about the two continuities, but that aside, you can see a lot of what’s happened as the natural progression of those stories.

Anyway, leave your comments below what you think about all of this, if you think this will end well or BADLY, and we’ll see what comes of this. Ja né!

← Red Sonja #12 Review – Voilà! She Is Clean!
Batman Confronts His Family In This Exclusive Preview Of ‘Batman Eternal’ #26 →