…Y’know what I haven’t talked about in a while? Kamen Rider. And really, why shouldn’t I? Kamen Rider is one of, if not the, greatest series of the Tokusatsu genre. It’s lasted for four decades (ignoring a television hiatus that lasted from 1989 to 2000), has had crossovers with a number of different series in Japan, including Super Sentai, Ultraman, and Metal Heroes, and has spawned dubs in other countries, including two in English. But, as many people know, one thing that’s needed for an action show is for it to have a kickass opening theme that gets the audience ready for the half-hour that’s about to ensue. Now, other than the opening themes, Kamen Rider HAS had a number of insert themes that are really good too, and I’ll go over some of my favourites later on down the road as well. For now, though, let’s look at my 5 Favourite Kamen Rider Opening Themes, and I think I’m gonna do these in the order in which each season aired, starting with probably the most obvious…

Yeah, you knew this was gonna be up here. While I admittedly prefer the 2000 version of Let’s Go Rider Kick, this is the version used for the official intro, so it’s the one I’m posting. And I’m sure everyone’s wondering what I think of the 2011 cover by Kamen Rider Girls, and…I don’t really have an opinion. I didn’t really care when it was first released one way or the other beyond “Oh, that’s neat, they did a cover for the movie”. I neither really like it, nor am I in the group of people that practically called death down on these women. It’s just a cover, you guys. Get over it. Despite being one of my favourites, though, if I WAS going to rank these, this would probably be near the bottom. No disrespect, it’s just I like the others on this list a lot more. Still, it continues to maintain its position as the definitive Kamen Rider theme. Just, uh, don’t pull a Neo Saban era Power Rangers with us and have a remix of this theme for every season anytime soon, ‘kay?

BLACK! 😀 Okay, while I haven’t watched most of this season, there’s just something about the general aesthetic of Black’s suit that I really love. And dammit all, I LOVE the opening theme to his season. It really gets you in the mood to see this guy lay down some hurtin’ on some Gorgom scumbags. I actually really love the closing theme, too, if we’re being totally honest. That’s why I can’t help but giggle and hum that theme when I watch the net movie for Kamen Rider Decade where all the suit actors are dressed as Showa Era Riders for a race, and Black is just walking like in the end credits. Funny stuff.

YES, for the 150th time, I actually like Kamen Rider Kiva! Honest to God, I don’t get the hate for this series, and I DEFINITELY don’t get the Twilight jabs at it, especially since, while the books had been out for a few years, the first movie didn’t come out until November of the same year Kiva started airing, by which time we’d already had 40 episodes of the series. Really, it just comes off as people being vampired out by that point, and not wanting to give this show a chance. But anyway, getting back to the theme song, I think it’s a really catchy theme, and fits the tone of the series pretty well. Also, good God, the weird-ass imagery. If that didn’t make you wanna watch just to find out what the frak was going on, I don’t know what would do it for ya. Still, as catchy as this theme is, it pales in comparison to the next two on my list, in particular…

FUCK YEAH! I have said before that Kamen Rider W is my favourite season, it has my favourite Rider of all time in Kamen Rider Skull, and Goddamn it, it has probably my favourite opening theme of any Kamen Rider season. It’s energetic, it fits the tone of the series, and the imagery produced gets you ready for this combo of a superhero show and a detective story that balances comedy with tragedy in all the right ways. The only theme I would stack up against it is the last one on this list…

While I don’t think it’s the BEST theme that was produced for OOO, and we’ll talk about THAT later on, the intro theme does exactly as is required: Get your pulse pounding. Granted, with some of the later episodes and some of the more tragic elements of the plot, hearing this energetic and happy theme can kinda result in mood whiplash. And while it’s true that other themes have done this, none quite to the level of OOO. Still, it’s a solid hit, and the opening credits sequence that accompanies the music definitely does a good job of highlighting these three individuals that are caught up in this hectic chase for the Medals.

So, those are my 5 Favourite Kamen Rider Opening Themes. Have a favourite that wasn’t on here? Lemme know in the comments below, and I shall see you guys the next time I talk about Kamen Rider, when I list my 5 Favourite Insert Themes. Ja né!

So, something I’ve been watching a lot of lately is Achievement Hunter. For those that don’t know, Achievement Hunter is a group of people working at RoosterTeeth that play video games, show you how to get various achievements in said games, and produce a lot of Let’s Plays as well. One of the games they play a lot lately is Grand Theft Auto V, where they’ve shown various Things To Do In GTA V, and even come up with their own heists to pull off…with varying levels of success, and a number of dead bodies strewn about. lol But because there’s so many of these videos, I decided I’d take a sec to talk about my 5 favourite videos in the series for the benefit of those that might be looking to start watching them. And while I can’t say that this is spoiler free, I will try to keep them to a minimum. 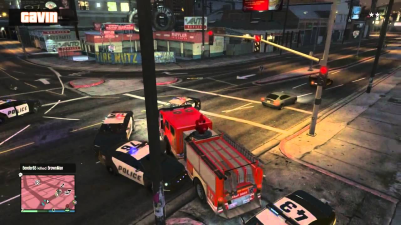 When you have a group like this one, made up of various gamers that have been shown to be at least a little crazy from time to time, you ultimately find yourself asking a very simple question: Who’s the most insane of the group? In this video, Ryan, Kerry, Gavin, Geoff, Jack, and Ray basically have a competition to see who can max out their mental state, thus proving who is statistically the most insane of the group. Naturally, things pretty much go nuts right from the get-go. The winner is actually determined so quickly that the rest decide to keep going to determine second-most-crazy, which ends up worrying the actual winner over how much faster it took them to reach insane than the others. I think what I find funniest about this is just the idea that, if this was for real, the debriefing of the Los Santos Police Department in the aftermath must’ve been HIGHLY uncomfortable. lol

What could possibly go wrong in a plan that includes Jack landing a private jet in the middle of the road for Geoff, Michael, Ray, Ryan, and Gavin to make their get-away after their individual robberies?…Actually, surprisingly enough, that was probably the part of the plan that had the least go wrong with it. I love this heist so much, that I actually loosely adapted it for the opening chapter of one of my stories on FictionPress. While I recommend you watch all of the heists, because they’re all amazing, hilarious, and have such train-wreck moments to them, this one is probably my favourite, with the only other major contender being…well, we’ll get to that later. 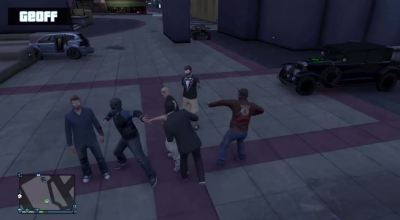 In this video, Kerry is essentially hazed by Michael, Geoff, Ray, Ryan, and Gavin, as they put him through the group’s ‘initiation tests’. The entire video is basically Kerry being put through Hell by these sick, sadistic human beings in a sick, sadistic video game world. Everything from parachute jumping, chasing down muggers (a LOT of ’em, actually, I need to do a count on just how many there were), evading the entire Los Santos Police Department, and a little game they like to call Frogger. Honestly, watching this, I’m filled with both the need to laugh out loud at everything Kerry’s put through and the desire to see him succeed. A very entertaining video to watch through. 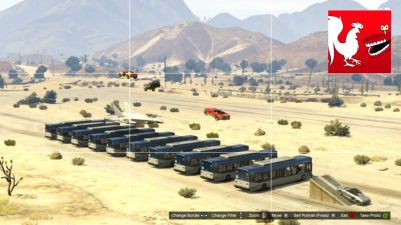 Okay, technically this is a Things To Do, not a Let’s Play, but honestly, I’ve found both to be kind of interchangeable. Besides, you really can’t talk about Achievement Hunter’s GTA V videos without mentioning the one that even Rockstar Games decided to spotlight. In this, Geoff watches on his in-game camera phone as Jack, Michael, Ray, Gavin, and Ryan try to jump a ramp on varying vehicles over 10 buses. Naturally, in true AH fashion, nothing can ever be simple, so at one point, Jack comes up with the brilliant idea of adding a low-flying plane to the mix. What follows is a moment so awesome, it had to be replayed over and over from each person’s perspective. I recommend you watch the whole vid, but if you just wanna see that awesome moment, skip to the 13:00 mark. Also, in case you’ve never seen this before, and have heard Ryan curse himself for saying the words “I’m still in the air”, welcome to the joke. lol 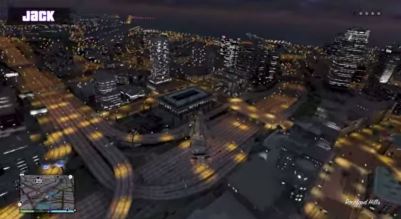 After Geoff, Gavin, Ryan, Michael, Jack, and Ray had all had their own planned heists, the gang decided to pool their creative input together to form The Grand Heist. This has actually been done twice: Once for a live crowd at the RTX convention, and once for the site. Both are frigging hilarious, so I suggest you watch the live version first, and then watch the standard version, since they get a bit further in the latter one, and it’s fun to compare and contrast between the two. And what is it that makes this the only other major contender for my favourite heist of all? Well, because part of the plan involves them making their get-away in a helicopter that has a cable that’s latched onto a tank, which is controlled by Michael. What follows is a spectacle the likes of which Michael Bay would probably jack off to in his spare time. LOL But otherwise, it’s just cool to see a heist that they all planned together, and the standard heist antics and hi-jinks are pretty much turned to 11 at this point.

Anyway, those are my 5 favourite AH GTA V vids. Lemme know what you all think of this list, what some of your other favourites are, and be sure to check in the next time I talk about Achievement Hunter, when I list some of my favourite moments from Let’s Play Minecraft. Ja né!