And no, I didn’t forget last week, I just didn’t buy anything. The weather was nasty out, so I didn’t go out. Also, I’ve been home sick with a cold, and I got my early Christmas present, the Wii U, a bit earlier than expected, hence why I haven’t writing much. But, I’m back, which means I now have the unfortunate responsibility of sending of one of my favourite books from this past year: The Fearless Defenders.

Suffice to say, Fearless Defenders, despite one or two dipping points, has been a delight to read this past year. I still haven’t had the chance to grab the first few issues before the one that hooked me, the issue with the awesome tournament fighter select screen cover, but I plan to, as soon as I can find them. In the meantime, though, I’ve loved what I’ve read of the series. If I haven’t made it clear, my favourite characters of the book have thus far been Annabelle, Valkyrie, and the newly created Ren Kimura. Still, the other members of this all superheroine team have been awesome in their own ways. It’s a shame to see their comic go, but at least we’ll always have the memories. And with that said, let’s look at Fearless Defenders #12.

So, long story short, Enchantress and the other Doom Maidens that Caroline LeFay let go ratted her out to the Defenders, so they go to where she and the rest of her team are hiding, while picking up a new member for the ride. It seems that Annabelle and Valkyrie are kind of having troubles, since it turns out part of the agreement with the All Mother to allow their little trick and let Annabelle return to the realm of the living was for her to remind Valkyrie of her duty to bring together shieldmaidens, not defenders. Also, Valkyrie’s a bit bothered by the fact that, every day, she’s becoming more and more like Annabelle. However, Annabelle counters that she agrees with Valkyrie, that the world needs Defenders, not shieldmaidens, and that she too is becoming more like Valkyrie. It’s a lot like Yugi and Yami Yugi from Yugioh: The two are balancing each other out. So, after hinting that Valkyrie likes Red too (thanks for suggesting the threesome that can never be, Cullen, lol), Valkyrie and the other Defenders go to work and stop the Doom Maidens, while Caroline decides to sacrifice herself to a pit sending off energy to summon something. The Defenders have their new recruit, Frankie Raye, AKA frigging Galactus‘ former herald, siphon off the energy to stop the pit, but it appears to have nonetheless summoned Morgan LeFay back to Earth. Still, the Doom Maidens are defeated, which is likely a huge hindrance to her plans, so I’m calling it a win for the heroes, which is good to see for the final issue. Still, I totally wanted to see Cullen Bunn’s plans for the book come to be, particularly them going into space and confronting Galactus. Although, I suppose revealing said plans may be a way to entice people into wanting to see the book come back. 🙂

Batman/Superman #6, still going with the gimmick of turning it on its side, apparently gonna be a thing for this arc. But regardless, we open the comic and we find that, following his VERY short fight with Mongul at the end of #5, Batman is dead…No, I’m not kidding. Mongul put a smoking hot hole in Batman’s chest. He’s DEAD. BUT, since it’s Batman, and this isn’t a major storyline that would get tons of attention, naturally he gets a get-out-of-jail-free card. A nanotech cloud formed by the players in what they still believe only to be a game brings him back. Fortunately, this gives him access to whose playing, and as soon as Supes finds out Jimmy Olsen is sitting in, he yells at him to knock it off…I think Olsen may have soiled himself right then and there. lol Anyway, Batman uses new powers granted to him through the tech holding him together to try to destroy the machine holding the game (and now himself) together, but Jimmy and the players stop him by taking over, having figured out now that it’s all real and not wanting Batman to die. Instead, they help him deal with Mongul when he starts attacking people, while Superman battles Mongul head on. However, Mongul has another trick up his sleeve. Remember how in last issue everyone’s heart rate went up, and now people have been a bit more prone to anger and violence? Yep, Mongul spread the pollen of a blossom that increases the urge for violent behaviour in people. And with the game up and running, now open to a ton of people who are affected by the pollen, and with Batman under their control, Mongul has the army he wants with the appropriate weapon for them to use: A super-powered Batman on equal footing with Superman. Unlike Earth 2, however, I like this twist, as we know this won’t be permanent, for obvious reasons, and that either Superman will find a way to free him, or Batman will override the system somehow, or Olsen and the others will free him. And hey, at least they’re doing this with Batman instead of Superman for the who-knows-how-many’th time this year. 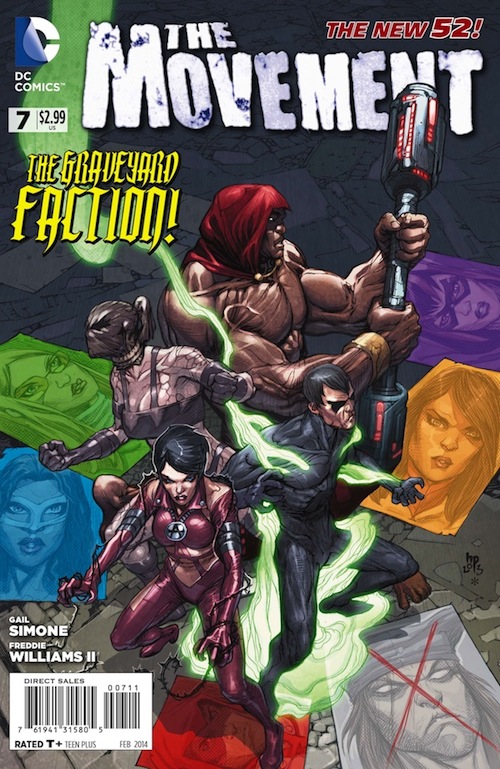 The Movement #7…Yeah, I think I’m dropping this book. Make no mistake, though: I still support this book. I still want this book around. I like the characters. I think I proved that when I made Virtue a character in my Birds of Prey fanfic. The reason I’m dropping this book is out of necessity. I don’t wanna get too much into it, but money is going to be an issue for myself and my family for a little while, and there’s some books coming out next year I wanna get, so I have to even it out. As a result, I will most likely be dropping The Movement, as well as one or two others. So, why The Movement? Well, because while I like the characters and the concept for the story, the plot itself seems a bit unfocused and goes back and forth on what it wants to do. Characters will just do complete 180 turns on their plans with little contemplation, like I mentioned before with Tremor, or here where Vengeance Moth tells Burden that the exorcism last issue was bunk. The only one that seems consistent is Virtue, I LOVE Gail Simone’s writing (which is why I’ll be more than happy to start buying Batgirl again once the current arc is done), and these characters are really special to me, but this story needs better focus.

Anyway, lemme know what you thought of this week’s comics, and join me next week as we look at Batman #26 and Nightwing #26. Ja ne!