Things I’d Like To See In Future Sonic Games

So I’m on kind of a Sonic the Hedgehog kick right now, in fact actually contemplating writing a couple of chapters of my old fanfic Sonic 5D’s. But I thought to myself recently, what would I like to see in some future Sonic games? So I thought I’d compile a short list, just for the heck of it. They are…

One of the few things I saw in Sonic X that I thought was frigging awesome was when Sonic transformed into his Dark mode. Considering that the games have taken things from the show and made them canon in the games (Shadow’s wrist rings being power inhibitors, for example), this would actually be a really awesome thing to include for a game.

Yeah, I know, a lot of people didn’t really like Shadow the Hedgehog‘s solo title, and the next time he was playable in a console game turned out BAD, but I’d still like to go back and revisit the rivalry between him and Sonic, even if it is more friendly now than anything.

#3 – The Return of Mephiles the Dark

No, really. Sonic ’06 may have been a colossal failure, but dammit, Mephiles was frigging awesome. He was evil to the core, he was a master manipulator, and he was legitimately threatening and scary (Dan Green gave him the ultimate evil laugh, in my opinion). Plus, of all the villains in these games, he actually succeeded in killing Sonic, even if it was only temporary. Doctor Eggman in all of these games has yet to accomplish that much. Granted, bringing Mephiles back would be tricky at best, but I’m sure there’s some way it could be pulled off. 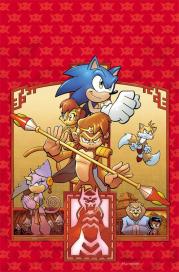 #4 – A Sonic Journey to the West game (Yes, I know that’s the cover to Sonic Universe #16, it was the closest I could find, lol)

This just seems like the most obvious next choice in the storybook titles, should they ever decide to do another one. I mean, Sonic is already based off of Journey to the West, so why not?

Yes, I know, he’s a blatant ripoff of Gogeta, but I don’t care. Hyper Shadic was frigging AMAZING in Nazo Unleashed, and his popularity is pretty much a proven fact with all the character mods that exist for him in various Sonic games. To see him actually playable in a game would be fantastic, especially as a playable character in the aforementioned Sonic vs Shadow game I suggested.

Why this and not asking for a sequel to Sonic Chronicles? Well, here’s the thing: Sonic Chronicles was made by BioWare, which was bought by EA. The day I ask EA to make a Sonic game for me is the day I willingly pull out my own anus. However, I really liked the idea of an Echidna survivor from another dimension, and hey, we could REALLY use something new to do with Knuckles.