Speculations on The Spoony Experiment

I’ve been doing a lot of speculation regarding the current storyline taking place on The Spoony Experiment, although as of recent eps, I think it might be safe to refer to it as The Sephiroth Experiment, but I’ll get to that. But yeah, these are a few speculations on plot points that have occurred and how it’s all tying together, and possibly where it’s all leading. Also, this will obviously have spoilers for people who haven’t been watching for a while, to which I only grant a single chance to turn back.

…Anyway, with that out of the way, let’s start off with a big one. Oh, and please remember that I could be WAY off with any of these. It’s just speculation.

Burton is working for Sephiroth

This one should be obvious. At the end of part two of the Final Fantasy X-2 review, Sephiroth appears by Burton, and we see in the Skullduggery review that he’s gone missing. He mysteriously returns at the beginning of part three of the FFX-2 review, but it’s clear that his programming has been altered. Also, we see that upon seeing Spoony, something called the Geostigma Protocol has been engaged. I’m not entirely sure if this means that Spoony has Geostigma or that it’s simply a codename to link it to Sephiroth, but either way it’s proof that Burton has been reprogrammed to work for Sephiroth, and if that one doesn’t sell you on that theory, this one should. 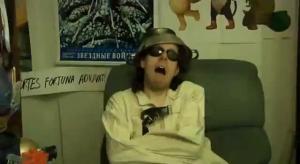 What Spoony is seeing isn’t real

For anybody that saw the ending of the Game Over review, you know what I’m talking about. If not, I will explain: At the end of the review, Spoony comments on the lameness of the plot and how the villain sends the protagonist into a virtual world to remain until he goes crazy. As soon as he mentions this, he sees the ankh, the symbol of the Avatar, and we are treated to some Grade A nightmare fuel. In case it was moving to fast for you to catch the whole thing, allow me to slow it down for you.

This seems to suggest that Burton has placed Spoony in some type of virtual reality that is subjecting him to instances that are driving him further into his insanity and rage, and once he started to realise it, was shocked back into his virtual prison and set back on course. But what’s the purpose of doing this? Why subject him to all of this? Well, that leads into the next point…

Sephiroth is using Spoony to drop Meteor on the Planet

Okay, for those of you that don’t know Sephiroth’s backstory, I suggest that you go read up on it. A great summary can be found here:

If you don’t want to read about it, I will state the one thing about his story and his goal that most matters here: In Final Fantasy VII, Sephiroth planned to drop Meteor on The Planet, thus damaging it to such a degree that the Lifestream would have to emerge to heal the damage, at which point he would situate himself in the centre of the impact zone and merge with it completely, thus becoming a god. This seems to suggest that in the TGWTG universe (that Spoony’s show still takes place in, despite being fired), there is a Lifestream running through our world as well. However, rather than use Black Materia to call upon Meteor, Sephiroth seems to have utilized a different method: I believe he is actually using Spoony’s anger as a power source to drag Meteor towards the world. And because Spoony is currently residing in his virtual prison, he is completely unaware of what’s really going on…although it seems that someone has tried to warn him.

The Guardian and Sephiroth are NOT working together

Okay, I don’t want people to think that I’m suggesting the Guardian is a good guy hear. He very obviously desires to destroy and have people bow to his feet. However, I’m fairly certain that his goals conflict with Sephiroth’s. What makes me say that? Well, after rewatching the ending to the Ultima 9 review and the little Mass Effect 3 spoof that’s done there, the red and green endings seem to suggest that Spoony would cause the destruction of the world. As I pointed out before, Sephiroth’s character is not that of someone who just wants to destroy the world, and Noah Antwiler knows that better than anyone. Instead, I’m pretty sure that the Guardian is instead out to destroy and conquer and also to screw over Sephiroth’s plans.

So all of that put together, I’m pretty sure I can come to the following conclusions for what’s to come…

This is what this current storyline is leading up to, no doubt. Noah has gone on record as saying that Final Fantasy XIII is, in his opinion, the worst Final Fantasy game ever (with possible exception being FFXIV, but let’s face it, EVERYONE hated that one lol). Plus, there’s the simple fact that Sephiroth gave him the case for the game, Burton was shown holding it at the end of the Game Over review, and it was inside the Armageddon spellbook when the Guardian gave it to Spoony. It clearly plays a role in Sephiroth’s plans, and as I alluded to before, they seem to be to bring Meteor down and merge with the Lifestream, thus becoming a god. Only by realising what’s been happening to him and breaking free can Spoony hope to stop him.

The three endings the Guardian shows won’t end up happening

Okay, I’m pretty sure the colour coded endings parodying Mass Effect 3 was just a joke, but even if it isn’t, I doubt very much any of them will be what actually ends up happening. I just feel that Noah is a bit smarter than to actually do that, or at least if he were to he would have some kinda follow up to it that doesn’t make it the end. Rather, his statement at the end of the Ultima 9 review and the look of determination in his eyes seem to suggest that he will find the fourth way out of this, stop Sephiroth, and save the world.

Anyway, those are my thoughts. Again, I could be VERY wrong in a lot of my speculation here, but it is just speculation, so don’t rip me to shreds if things don’t play out like I said. Ja ne!

Okay guys, I know that what few of you that actually watch my show are probably wondering where the review of The Semi-Final Frontier is. The answer? Well, it’s not coming. Not any time soon anyway.

As anybody close to me can tell you, I’ve kinda been going through a rough time lately. And before anyone asks, NO, it’s NOT because of my recent breakup. It’s more than that. I really am beginning to consider that I have clinical depression or something at this point, given the way my mind seems to go out of its way to under-mind and sabotage me. No really, the other day my group at Key Industries was going to Jungle Jims (a restaurant) for lunch, and I had to drag myself out of bed, all the while my brain was asking me stuff like “Do you REALLY wanna go to work? Do you REALLY wanna go to Jungle Jims? Do you REALLY wanna be stuck in that restaurant and be forced to socialise with your coworkers?” Short answer, YES DAMMIT! But that’s just how my brain has been lately.

Lately I’ve taken to writing fanfiction, tribute and parody videos, and blogging. That seems to be keeping me in a better mood. So for now, Jyger’s Rant – The YouTube Series is on indefinite hold. Will I ever go back to it? I should sure as hell hope so, I had some great ideas for upcoming episodes. But for now, this is me saying not to expect a new review any time soon. Ja ne!