…I wasn’t going to do it. I really wasn’t. It seemed like it would be a fool’s errand to even try, and to be honest it still kinda does. But then I went back and I re-watched the Angry Video Game Nerd attempt to pull it off. That should’ve been the end of the debates right there, but really, I think it’s only made it worse. So I’m gonna try to put this sucker to rest. This is my take on The Legend of Zelda: The Chronology.

First off, lemme just say that I’m NOT a gaming historian of any kind, nor do I play one on television. I’m just a casual gamer who loves good games and has a tendency to pick on little plot holes in games that are story-heavy. So don’t freak out if I make a mistake or you don’t agree with my views on the subject. If I make a mistake, simply tell me what I did wrong without flaming the hell outta me.

Anyway, in this first part, we’ll be looking at the first two Zelda games as well as the SNES game, so to start off, let’s look at the original Zelda game on the NES, simply titled The Legend of Zelda. It’s a very simple story (especially when compared to the others) of a young elvish boy named Link who journeys to save the land of Hyrule from the evil tyrannical boar named Ganon (misspelled Gannon at the time), who had obtained the Triforce of Power and kidnapped Princess Zelda. The only way to defeat him was to obtain the shards of the Triforce of Wisdom, which was split apart by Zelda to keep it safe from Ganon, and then take him on in the labyrinths within Death Mountain. So you go through the dungeons all around the kingdom, you fight through an endless onslaught of monsters, solve ridiculously hard puzzles, reassemble the Triforce of Wisdom, go to Death Mountain, kill Ganon with the Silver Arrows, and save Princess Zelda. The end…right?

Well no, because there was a sequel the next year, Zelda II: The Adventure of Link. In this game, Link turns sweet sixteen, but instead of a cake to blow out, he’s got a Princess to wake up. We learn that there was another Princess Zelda and another Triforce, the Triforce of Courage. Now the Triforce of Courage makes sense, since the name Triforce would suggest that there are three of them, but what’s the story on the new Zelda? And I’m quoting an article from the Zelda wiki here: “Ages ago, the King of Hyrule had hidden a third part of the Triforce, the Triforce of Courage, in the Great Palace to safeguard it from evil. Upon the death of the king, his son had searched eagerly for the missing Triforce, but its location had been imparted only to the king’s daughter, Princess Zelda. Angered upon learning this, the Prince tried to use the power of a wizard to force the truth from his sister, but when she refused the wizard cast a spell upon her to put her into a deep and unending sleep, the wizard died soon after. Only by uniting the Triforce of Courage with its counterparts could Link awake the sleeping Princess Zelda.” Oh, and apparently the Prince decreed that every Princess born from then on would be named Zelda, which explains a lot later on but then also confused a LOT MORE…

Anyway, Link finds out he has to defeat these Guardians to lower a binding field around the Triforce of Courage’s location. Making matters worse was that Ganon’s followers wanted to kill Link and use his blood in some kind of ritual to bring back their master. So Link went around, solved puzzles, defeated enemies, and switched back and forth from a top-down perspective to a 2D side-scroller before obtaining the Triforce of Courage and awakening Princess Zelda, and we see the end where it’s implied that she made out with him or something. Aw, isn’t that sweet?

4 years later, the SNES was essentially replacing the NES, and we got a new Zelda game: The Legend of Zelda: A Link To The Past. Now this is where things get a bit confusing, as once again we have a new Zelda, but also a new Link. According to the packaging for the game, these Link and Zelda are the predecessors of the ones from the original game. That would make sense, except that we now don’t know if this takes place before the Zelda from AoL was put to sleep or after, and believe me, it only gets worse from there, and continues to be made worse to this day…but I’m getting ahead of myself.

In this one, we learn a LOT more about the history of Hyrule. There was a conflict known as the Imprisoning War centuries beforehand, where an alternate realm of existance known as the Sacred Realm was invaded by a band of thieves led by a man named Ganondorf Dragmire-wait a minute, GANON?! Yeah, apparently he was originally just some thief. And what was he looking to steal from the Sacred Realm? An ancient relic left behind by the three Goddesses who created Hyrule known as the Triforce… … …Okay, NOW we’re officially running on confused, since the back-story of AoL said that the Triforce of Courage was kept separate from the other two pieces, but you could concede that the events of this game happened before all that…or so you would think, but again getting ahead of myself. Anyway, long story short, Ganondorf killed his followers, got the Triforce, and because the Triforce can apparently reflect the wishes of he or she that touches it, it turned the Sacred Realm into the Dark Realm, and turned Ganondorf into the boar-like creature we’ve known from day one. Thankfully, a group of wise men known as the Seven Sages managed to seal Ganon and the once Sacred Realm away, keeping Ganon from invading the Light Realm in which Hyrule existed in.

So what goes wrong? Well, one day disasters just kinda spontaneously start happening, until this wizard Agahnim (pronounced AY-gah-nim, by the way. I always used to pronounce it a-GAH-nim) stepped up and stopped the disasters, was proclaimed a hero, and was made chief advisor to the King at that time. But he wasn’t even close to being the hero people thought he was, as he used his power to brainwash the guards of the palace, and started kidnapping descendants of the Seven Sages in order to sacrifice them to open the way to the Dark Realm. Zelda was to be the last of the descendants to be sacrificed, but she uses telepathy to contact Link, who saves her and then goes on a quest to defeat Agahnim.

It’s in this game we’re introduced to a weapon that has existed as a major part of Zelda mythos ever since: The Master Sword. Link is sent to find obtain the sword as it is the only weapon that can defeat Agahnim, but the only way to pull it from the pedestal in the Lost Woods is to obtain three Pendants of Virtue, which are held deep within three dungeons scattered about Hyrule. So Link braves the dungeons, solves the puzzles inside, defeats the creatures taking up residence in each one, and leaves with the Pendants. He then goes to the Lost Woods, pulls the Master Sword, and goes back to Hyrule Castle to confront Agahnim…only in this game they pull the rug out from under us as we get Link up there just in time to see Agahnim, having kidnapped Zelda again, has just sacrificed her to release the seal on the Dark Realm. Naturally after seeing that you’ll wanna go and kick Agahnim’s butt, which you do, only to have him pull you into the Dark Realm.

This is where the second half of the game takes place…well, not really second half, because it’s much longer than the first half. Here we learn that Zelda and the others aren’t dead, and are merely imprisoned in seven dungeons throughout the Dark Realm that make the ones visited previously look really easy. So once again, Link has to traverse each of the dungeons, defeat the monsters inside, solve ridiculous puzzles, and rescue each girl. With each one you rescue, a bit more of the back-story is revealed, specifically revolving around Ganon who, spoiler alert, is the real villain having acted through Agahnim! Gee, what a shocker, huh? 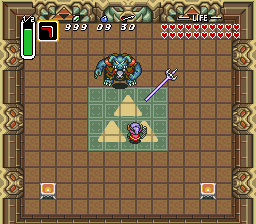 But I digress: You save all the girls, ending with Zelda, and you go to Ganon’s Tower to put an end to it all, only for the game to once again trick you into thinking the end is here, and instead you fight Agahnim again, only this time he’s a lot harder. You beat him, and it looks like you’ve finally killed him, but then this transparent image of Ganon comes out of him and you chase him down to this temple where you first appeared in the Dark Realm, only the roof’s been blasted open so you can get in, where you face Ganon in the final battle. After a rough battle that can’t even technically be won unless you first went and got the Silver Arrows, you utterly destroy him and obtain the Triforce, restoring the Sacred Realm and putting everything in Hyrule back to the way it was.

So there ya go, a general synopsis of the plots of the first three Zelda games, and thus far everything seems to be in order as far as chronology is concerned…OR IS IT?! You see, all of this only works if you consider A Link To The Past to be the prequel to the first two Zelda games, but next time we’ll see how that theory may or may not have been blown all to hell when we look at a game considered to be the crown jewel of the Zelda franchise, The Legend of Zelda: Ocarina of Time.

Posted in The Zelda Chronology